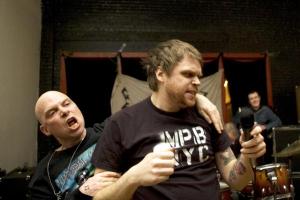 For more than 20 years hardcore's aggressive style and hard-line attitude has permeated America's underground punk music scene. While many bands in the genre tend to take themselves and their music very seriously, Milwaukee's Get Rad is one of the few bands that have been able to maintain their hardcore credibility using vicious musical and verbal attacks on all that they see wrong with world, while simultaneously allowing themselves to write songs about breaking into water parks and having fun with friends.

Get Rad's bassist, Dave Rudnik, among myriad topics, discusses the band's new album, their do-it-yourself approach to music and the death of fellow musician Mat Arluck in this interview with Brandon Campbell.

First, could you give me a little bit of background on Get Rad and how you fit in to the band?

Get Rad started a little over five years ago, December of 2004 to be exact. At the time, I was working with our guitar player and he told me about a band he was starting with his brother and I kind of strong-armed my way in. They actually had a different bass player lined up, but he got in a motorcycle accident. Donât worry, he's doing fine now.

Glad to hear that he's okay. How does he feel about you taking his place?

He was just the bass player in theory. They hadnât practiced, yet. By the time I joined, the other three members had jammed once or twice and had only written one song.

Not at all. Heâs still a good friend of the band.

Cool. How long have you been playing bass?

I started when I was in seventh grade. Iâm 32 now, so a while ago. I got a bass for Christmas and two of my best friends got guitars. This kid that we werenât really friends with got a drum set, so that completed my first band. I donât think we ever played a full song together.

Such humble beginnings. Were you playing in bands before Get Rad?

Yeah, quite a few. The ones you may have heard of were Seven Days of Samsara and Kung-Fu Rick.

How does playing in Get Rad compare to your previous bands?

Get Rad is a ton of fun. It was the first band that I had been in for quite some time that didnât take itself super seriously. We started the band to have some fun and I think we accomplished that.

I noticed that you guys aren't afraid to fuse humor in to your hardcore sound. One of my favorite songs of yours is the cover of "I'm Seeing Red" which you changed to "I'm Peeing Red."

Yeah. I came up with that one night at a show. I had just purchased a two-liter of fruit punch and the song pretty much wrote itself. Itâs a fun song, but it's a bit unfortunate that it seems to be our most well-known song.

Why is that unfortunate?

Because, it's a joke.

Itâs not that were super serious, but it's a 10 second bit of humor. That being said, Iâm happy the way it turned out on the record and if thatâs how someone hears us for the first time, thatâs awesome.

I think itâs a good thing. Sometimes punks and hardcore fans can be a bit too serious and bringing some levity to those music scenes is a welcome change.

Do you have a song that you would prefer to be known for instead?

Iâm not sure if I could choose one. I think "Cool Waters" is a good one. Short, fast and simple and the lyrics are about sneaking into water parks.

That's a good song. You also have a video for that, don't you?

Yeah. Our singerâs girlfriend made that for a school project. Iâm really happy the way it turned out. There's talk of making another one, but nothing set in stone yet.

So, even your video was in the vein of D.I.Y.

Do you guys try to adhere to a D.I.Y. ethic with your music production and things like that?

Yeah. As far as production goes, since our first demo, we have been recording with our friend, Shane Hochstetler. We started in his basement and since then he has opened a pretty rad studio called Howl Street Recordings. As far as releasing music goes, we try and work with friends or at least people who seem to be releasing music for the right reasons.

Well said. What are the right reasons to you?

Because they love music. Most of the labels we have worked with arenât genre-specific. They have released records by all sorts of bands. To me, that means that theyâre just releasing the music that they like and I think thatâs pretty cool. I like to think of music as an expensive hobby and not a career.

Interesting point. Are those the reasons that lead you to work with Justin Schweir of Underground CommuniquÃ©?

Totally. Iâve known Justin for years and Iâm glad that we finally got to work together. If you look at Underground CommuniquÃ©âs back catalog, you will see that itâs extremely diverse.

Could you tell me a bit about what you guys worked on with Underground CommuniquÃ©?

Justin recently released a one-sided 12" e.p. for us entitled What the Fuck Happened to Common Sense? We started talking to Justin about releasing a split 7" between us and Sweet Cobra, but that wasnât going to be ready in time for our West Coast tour, so Justin released all nine songs that we had recorded during that session. The split with Sweet Cobra is still going to happen. It just had to be on the backburner for a bit.

Yeah, our friend, Mat Arluck, who played guitar for Sweet Cobra, passed away on Thanksgiving from cancer.

I'm sorry you lost a friend. Were you close?

I really only knew Mat for a couple of years, but those few years were enough to let me know how rad of a guy he was.

Death is always tough to deal with, no matter how long you knew the person.

Is Sweet Cobra continuing to play in the wake of Mat's death?

At least his music will live on after him.

That is true. Music will outlive all of us.

That is part of its appeal. Sorry to bring the mood down.

Thatâs ok. Thatâs the way life is. While our band is called Get Rad and we make shirts with bright colors, weâre still real people, in the real world and that world sometimes sucks.

Agreed. We talked a bit about your humorous songs, and since you mentioned how this world sucks sometimes, what kind of serious ideas do you guys sing about?

Kevin writes lyrics about his life and the shit around him. From family and friends to more fucked-up shit like his desire to kill priests who have molested kids. Howâs that for serious?

Pretty fucking serious. But, I can see Kevinâs point of view.

Yeah. Kevin seems to write about whatever is on his mind and his mind is all over the place.

I picked up on that as I was listening through your albums. I really appreciate that Get Rad doesn't limit itself to only singing about a certain set of ideas or simply writing goofy songs. It shows that you aren't pandering to your audience. Instead, you're being real people in a band.

Thanks. We never really set out to accomplish anything with this band. We wrote some songs, recorded a demo and people seemed to like it. Before we knew it, we had someone to put out a record for us and we were booking a tour. We donât have huge ambitions for the band, but we are appreciative of everything we have been able to accomplish.

That's a pretty humble attitude. That's rare. How have people been reacting to your shows, your music and your albums?

The reaction has been pretty good. We have been on a few tours and made it out to the West Coast for the first time this past fall. We have played over 100 shows in the past five years and there have only been a few stinkers in the whole bunch.

The bad shows have their place. Plus, sometimes isn't it fun to bomb?

No. Not really. Iâm not saying there have been a ton of people at all of our shows, but usually we as a band have been able to have a blast if there are three or 300 people there.

That's a great way to look at it. I think as a performer you kind of have to develop a thick skin and just continue regardless of the circumstances.

Totally. Even if there are only a few people there, it seems like they can have fun as long as were having fun. I mean, were all busy people. We've all got way too much shit going on in our lives. If weâre going to make the time to go to a show, whether it be playing or just watching, what's the point in not making the most of it?

Good point. You seem to gravitate towards the positive things in life.

Yeah. It can be annoying to my wife at times.

(laughs) One last question before we go.

I saw that you guys have a five-year reunion show and an Underground CommuniquÃ© show coming up. Do you have anything special planned for these shows?

Iâm not sure. Nothing too crazy. We have done things in the past with TV monitors and light-up signs. We might try something like that for the Milwaukee show, but probably not the Chicago one. Itâs too hard to travel with all that shit, especially in our minivan. It will probably be just an ordinary show with a bunch of friends and new records.

Nice, well I hope to be at the Chicago show.

Awesome. Be sure to say hello.

Sorry, one more quick question. What do you guys have planned for the future? Are you going to be doing another album or tour?

I really have no idea. Justin released that e.p. in January and this month we have our second full length coming out. Itâs called I Can Always Live and it is being released by Gilead Media and Hyperrealist. After that, weâre going to release a split 7" with Sweet Cobra. We donât have any big touring plans at the moment, but who knows what will happen. As I said earlier in the interview, life is busy; sometimes itâs hard to escape real life for two weeks in a van.

Well, you guys seem to have been busy enough for the past few months. I hope you guys get some time to enjoy your real lives. Good luck and thanks for talking.

Thanks a bunch for doing this interview. It was fun talking to you as well. Look forward to meeting you In Chicago.

Tours: Laura Stevenson and The Cans (US / Canada)