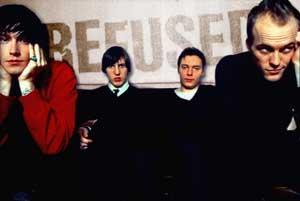 by Bryne Yancey Epitaph 12 years ago

This weekend, seminal Swedish hardcore pioneers Refused updated their website, which can be seen here. The site reads little more than a cryptic Coming Soon.. and has led a few news outlets and dozens of twitter users to speculate -- and in some cases, outright assume -- that the band has reunited. Others, like us, have been speculating about vinyl reissues of past albums or, as crazy as it sounds, a new website and nothing more.

Nothing official has been announced, but we'll keep you posted. The band last released The Shape of Punk to Come in 1998 and split up later that year. Members went on to form The (International) Noise Conspiracy, The Lost Patrol, Text and AC4.

UPDATE: An anonymous source close to the situation has confirmed that Refused will indeed be reuniting. Plans right now include live performances at some to-be-confirmed European summer festivals. We'll keep you updated as details come in.