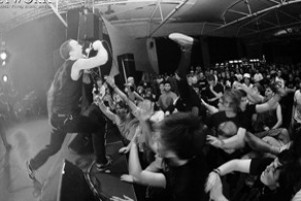 Outbreak continues updating us on their current tour with A Wihelm Scream as the band supports their self-titled release from last year. Conveniently, so is A Wilhelm Scream.

We made it to Quebec City safe and sound, and played a bar that looked as if itâs intended for high profile cocaine parties. Definitely looked like something out of Scarface. Not so much a punk rock atmosphere, but good sound, and good turnout considering the crappy weather. Our battery died after the show, so Wilhelm jumped us. Nuno knows a thing or two about automotive repair, Iâll tell ya that much, guy. But seriously. We didnât even get out of Quebec City before our van died on the highway. Brian haggled the tow down to $200 from their asking price of $375. Granted they DID send out the entire Quebec City department of transportation and police squad to come rescue us (seriously, the picture does no justice to the absolute trainwreck of tow trucks and police cars who were "on the scene" when we needed the tow). It was literally a 3-kilometer tow to the mechanic! The mechanic than assured it was a quick fix, and threw us a not so cool $241 bill. Brian haggled them down to a cool $50 + 2 Outbreak CDs. Smooth. Ray (AWS tour manager) called us and said we were in for some bad weather when we get closer to Rimouskiâ¦he was right. Really bad driving conditions, but were were breaking the snowy trail. 15 minutes away from the show we got pulled over because our trailer lights werenât working. Instead of fining the shit out of us and towing the trailer (like they would have in the U.S.) they instead gave us a police escort to the venueâ¦they were very concerned that we make it to our show on time. Canadian cops have our back.

So far every update has been about bad weather, mishaps, and van repairs. Touring life isnât all fun and gamesâ¦unless youâre Motley Crue, or something. Iâm not complaining, just sayin.