No Use For A Name and Lagwagon heading to Europe, new NUFAN album planned 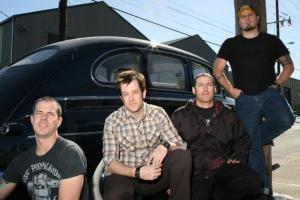 According to a MySpace bulletin posted by No Use For A Name, the band plans to head to Europe with Lagwagon in July and August for some festivals and shows. No dates confirmed yet, but we'll keep you posted. The band also noted that Tony Sly has been writing songs for the next NUFAN album as well as a new solo record. More details are expected soon, but both records are expected out in 2011.

Sly released his debut solo full-length 12 Song Program earlier this year, while No Use For A Name last released The Feel Good Record of the Year in 2008.

Streams: Red Sparowes: 'The Fear Is Excruciating, But Therein Lies The Answer'