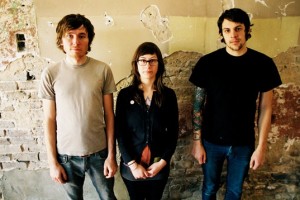 It's important for us to have a diverse roster of artists and we feel like Lemuria compliments a lot of our other bands while standing strong on their own accord. We've had Get Better in rotation in the office here for a while and after adding two hardcore bands to our roster, Mother of Mercy and Foundation, we decided to change it up a bit and sign Lemuria. I think our roster really mirrors our collective musical tastes and it's always exciting to expand on the types of music we release.

The band has released a myriad of splits and 7"s (drummer Alex Kerns runs the label Art of the Underground) and one full-length LP, Get Better, on Asian Man Records in 2008 that our own reviewer called the best debut full-length of the year. This July, Lemuria will hit the studio with producer J Robbins at the Magpie Cage in Baltimore, MD (Hey Mercedes, The Promise Ring, Jawbreaker) to record their yet-to-be-titled Bridge Nine debut.

Music: Minus the Bear: "Omni"