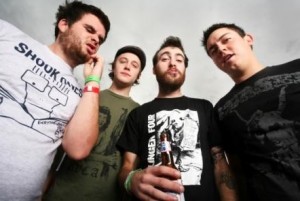 The Flatliners, hot on the heels of the release of Cavalcade, are making their way across Canada with Broadway Calls and Cobra Skulls. The band has agreed to drop in and give us some dispatches, the first of which we bring you tonight.

Were finally back in Canada! We've been away from "home" for almost 6 weeks. Did a bunch of shows in the States and finally made it to Australia. It's all been a blast, but now were back in Canada, where beer is good, food and gas are too expensive, but weed is good and cheap. Luckily when we were crossing the border today, this old fool crashed his decaying RV into the border patrol booth next to us - smashing both his side view mirrors off and taking all the attention off of us and our trailer full of merch we shouldn't be bringing into the country. So thank you old man! We're so glad you completely neglected to take your massive rig through the appropriate truck lane. First order of business after we crossed the border was hit a Tim Hortons and finally get our proper Canadian fix. After that, it was to head to the Vancouver airport and pick up my girlfriend so we can swindle kids into spending their hard earned money on our t-shirts by planting a friendly, attractive girl in front of them. Works every time!

Before loading in to the club, our very own Cheech and Chong (Paul and Jon) bought a brand new bong at the New Amsterdam Cafe down the street and made good use of it. This is only about 40 minutes after we get into Canada I'd say. The show in Van was fucking incredible. The place was packed, the kids were singing along louder than the PA, they were super-responsive to our new songs, and we even got to see some of our friends from Carpenter and Living With Lions. Our new friend Allana at The Media Club took really good care of us. Lots of liquid confidence. All in all a good night. After the show we headed to Whistler to have the whole next day there. Overnight mountain drive #1 whoo! 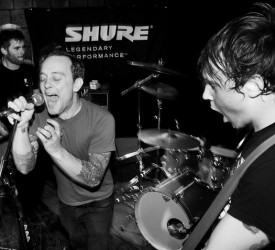 Our plan to wake up early and have the day at Whistler/Blackcomb mountain was foiled by our yearning to sleep in like bums. Scott was off snowboarding with his brother who recently moved out here, so it was up to us and Cobra Skulls to find something cool to do. We were told we'd be getting Gondala passes for all the bands from the promoter of the show tonight, but it turned out they were booked for the wrong day. Mother fucking bummer. Instead we met up with our friend Shelley who also recently moved out here and took us out for a massive feast at the restaurant she works at. My oversized burrito put me into a food coma until we loaded in. The venue was a restaurant during the day, so when we showed up to load our shit inside, the "stage" was littered with people at tables enjoying their meals. After the place started to clear out we had a big family dinner with Broadway Calls and Cobra Skulls while the house music played "Paint it Black" by the Rolling Stones on repeat for some reason. Good thing we all like the Stones or else someone would've been bummed. We soundchecked some cover songs we were working on for tomorrow's set in front of a table full of people there for a little kid's birthday party. That wasn't awkward at all.

The show began with Cobra Skulls. This band is one of the greatest bands around today. They kill it every single night and just keep getting better. Their song "Rebel Fate" is undeniable and is currently the soundtrack to my life. Broadway Calls played a great set with Matt singing since Ty was really sick, and the funny thing was you couldn't even tell it was Matt. They sound so much alike its unreal. Its impossible to watch Broadway and not sing along with a smile on your face, so tonight marked the first time I helped them sing "To the Sheets". I love that song. Once we were up, we played a few new songs off 'Cavalcade' that we hadn't practiced in quite a while, but I think they went over pretty well. After the show, and before our treacherous 12 hour overnight drive through the mountains to get to Calgary, us and Cobra Skulls stole someone's skis and had Ass-Ski races down the foot of Blackcomb. That's when you sit on a ski with your ass and just go for it. Me vs. Luke from Cobras. Flats win huge! No big deal… I am drunk so in my victorious stupor I begin to sleep my life away until I have to drive in the morning. Zzzzzzz.

Gnarliest drive of our lives. Whoever built HWY-99 in British Columbia has a pretty obscene interpretation of driving. The idea must have been introduced like this: "Hey let's drive up a massive incline for 25 km and when we need to turn, instead of making it an easy one, let's just flip the HWY 180 degrees." Craziness. Alas, we made it to Calgary. We loaded in to a club we'd never played before, called The New Black. Its a venue/art gallery run by Jay of the super-amazing and now defunct Canadian tech-punk outfit Belvedere. We've known Jay for a couple years, and to have him be the club owner and sound engineer is a good thing, believe me. After we practiced the same covers we did in Whistler a few more times, we grabbed a few Cobra Skulls and Broadway Calls and took them to our favourite novelty eatery in town: Tubby Dog. This place serves the most ridiculous hot dogs you've ever seen. For instance there is one that comes with peanut butter, jelly, and Cap'n Crunch. To me it sounds disgusting, but friends of ours have said its tasty. I personally got the "Ultimate Bomb" which doesn't look anything like a hot dog once all the fixens are on there. You get a hot dog buried in ketchup, mustard, horseradish, Sriracha hot sauce, potato chips, bacon bits, and of course a pickle. Needless to say, an hour after eating this beast I created an "Ultimate Bomb" of my own. Yup, its come to poop jokes.

We get back to the show and the place is pretty full. We're stoked. Cobras play, and of course they play amazingly well. Broadway Calls are up next and tear it up as usual. We get up there, play some songs, tell some bad jokes, and are having a blast. Then we unveil our secret weapon. I found out a week prior to this show that our buddy Dave Hause from The Loved Ones would be in Calgary the same night we would be. Furthermore, his solo show was our show's "afterparty." Naturally we had to do something together, so we learned "Suture Self" by The Loved Ones, and invited Dave on stage during our set that night to play that song and "Hybrid Moments" - the Misfits song EVERY band covers. It was a lot of fun to share the stage with Hause in that way. We've known him since before we were legal to drink and he's been a big supporter of our band since the day we met. 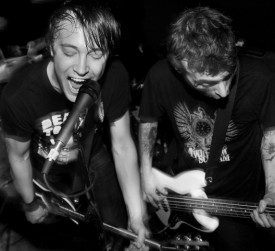 Our show was a blast, and afterwards we headed to Dave's solo show - where he told stories of him doing PCP as a kid between songs while some of us tripped out on weed brownies. Devin from Cobra Skulls was being hustled by Canadian cops before Dave's set for some random guy drinking outside of Cobra's van. Poor guy. But he made it inside to enjoy the good times. After we hung out at the bar Dave played at for while, we took Dave and headed back to a friend's apartment - where their roommate threatened uber-violence on us for being awake at 3 AM. According to this roommate, we were "losers" for being up that late. Calgary is always a good time. Tonight is no exception. Even if we're losers.

Boring drive to Edmonton, but at least its not half a day long and through the mountains. Edmonton's been a bit of a tricky city for our band in the past. For a while it was one good show, one bad show, and on like that. We've been really lucky to play with some great bands there in the last couple years though, so now its a raging party to visit Edmonton. At one point before the show, this guy showed up with the original artwork for our 'Cynics' 7" that he bought from Horsebites. Richard/Horsbites is such an incredible artist and we're really stoked to have gotten him to do the artwork for that 7". Its really cool to see artwork like that in its original form. Stoked he brought that to show us. Other than that not much happened before the show, but once it started it was like a bomb went off. It seemed like these kids were there to have the time of their lives or something. So rad. And it was a Monday night! Monday shows are notorious for being weak, but Edmonton brought the good times. Thank you Edmontonians for being so awesome to us!

My girlfriend/our merch girl Britt's birthday was at the stroke of midnight, so we drank as much Jagermeister as we could on stage in celebration and, at her request, played "Monumental" off of 'Cavalcade' for the first time live. For a mellow kind of song, it went over really well. The night of course gets blurry after that, but our buddy Ben took us, Broadway Calls, and Cobra Skulls to this cool little pizza/chinese food joint called the Steel Wheel for our after-show feast. Britt is teaching everyone hilariously drunken life lessons and is definitely the life of the party. Everyone's in good spirits but we know we've got a long drive tomorrow, so Cobras head to their slumber palace and us and Broadway Calls have a sleepover party/fart fest at our friend Ben's house. Thank you Edmonton. Good night! 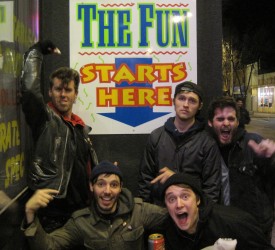 Ty from Broadway Calls sums up the drives through the Canadian Prairies. The book turned film "The Road." There's nothing. For miles. And miles. And miles. And when its raining and grey? Even better! Super boring drive, but at least once we get into Saskatoon I hit a curb and pop a trailer tire a block away from the club we're playing at. At least there was some excitement. Oh, and when I say "club" I of course mean the Saskatoon Cosmopolitan Seniors Center. For a mid-week show it was still a good turn-out, and everyone still had a good time. We were celebrating because today was the day our new record 'Cavalcade' is released.

After the show we let Devin from Cobra Skulls' amazing tour-dog "Bella" into the Seniors Center and laugh our heads off at her chasing empty water bottles for probably 20 minutes. What can I say, Saskatoon is pretty boring. But this dog is incredible, and for some reason just loves chomping on plastic. After we part ways for the night, we get a quick drink at "The Hose" next to the Seniors Center - a bunch of hosers getting hosed at the Hose - and then head to Denny's for an after show feast. After being used to the prices at Denny's in the US, eating at Canadian Denny's is kind of a bummer. Not to mention Britt was denied the birthday special because it hadn't been her birthday for a mere hour. Oh, and our waitress spilled marinara sauce all over Jon and our tour manager Dorian. We told Jon he looked cool and dangerous now because it looked like a blood-stain but he was still pissed about it. Fuck you Denny's.

Interviews: Brett Adams (The Riot Before)