Band on Band: The Holy Mess/Highlites

Welcome to the latest addition of Band on Band. We're happy to present two great acts from Philadelphia, Pennsylvania, The Holy Mess and Highlites. Both bands have 7" available from Evil Weevil Records. The boys took turns asking each other about jobs, touring and inappropriate photos.

State your name, where you're from, what you play, and what Highlites has in store for 2k10.

This is Jon (drums/vocals) Dan Black Beard (bass/vocals) and Dan Red Beard (Guitar/lead vocals) Together plus our other guitarist Scotty who isn't here we are Highlites from Philadelphia Pa. 2k10 is going to be a good year for us. We are going to be dormant for most of the summer because Red Beard here is going to Europe with his other band Dirty Tactics again which we are all stoked about. We will miss him. Our new guitarist Scotty is killinâ it on second guitar so we are writing songs for the LP. We plan to have out by the winter sometime. The writing process has already begun and we are stoked on the new songs. Other than that we are planning a 2-3 week tour in August/September time. Around Steve-O's wedding obviously.

Highlites recently put out a new 7" on Evil Weevil Records. What were the inspirations for the songs, and how did this project come about?

Song inspiration… hmmm… Well most of the lyrics are obviously fantasy themed, with dragons, vampires and such… so you can see where that comes from. OR, we all have had some fucked up situations with girls. All with in a week of each other. PICK ONE!

A while back, Highlites did a short tour which brought you to the Rock and Roll Hall of Fame. I was receiving some shady ass picture messages from the front lawn of said establishment. What exactly was going on?

I guess I just like to drink heavily at 9 am and lay in the flowers naked…? Come ask us about it if you want the full story. OR, go ask Matt from The Sidekicks what we did to his house the night prior. We are still very sorry and we have your bottle of Jager waiting. Cleveland is a dead city on Sundays!

Two members of Highlites have beards. One beard being red and one beard being black. Considering the game of Backgammon, which beard would you bet on, and does this decision rely solely on the Dan in which said beard resides?

Well Yossie is always bettinâ on black. So we have to trust the man who has a beard far more superior to anyone else here!

If one of the Punknews readers magically won a trip to Philadelphia and had the misfortune of hanging out with your band, what would a typical (not so typical) visit consist of?

Honestly, just advise whoever that Punknews reader would be to NOT hang out with us. It's not worth it. 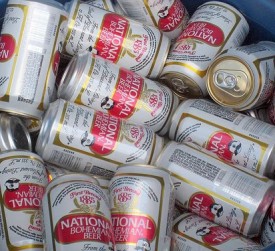 State your name, where you're from, what you play. SO, new guitarist, new label, new 7", new sesh? What's good boys?

Hey dawgy…we're Steve-O, Yosco, Rob and Scotty from Philadelphia by way of the Poconos except for Scott because he drives like an asshole in a douchey car. He's from dirty jerz and likes it. Weird. Collectively we make up the atrocity known as The Holy Mess. The rumors are true…our buddy Bill over at Evil Weevil is putting out our new 7" and we're psyched about it for sure. The jumpoff be called "Benefit Sesh" and will hopefully be beneficial to all. Release date is set for June 8th of the year of our lord 2010 and that's a treat feast straight from the Meat Beast, which is in itself a hot dog cart that I haven't invested in yet. If you would like to get in on the ground floor of this investment opportunity, get in touch over at Weird Skull Enterprises.

So it's said that you will have your Evil Weevil debut 7" at this upcoming Rad Fest. After that, an east coast tour with The Menzingers ensues. It sure sounds like a blast. How do you think it will go?

Well east coast tour might be a little too wordy for the fucks, but we are gonna hit some northeast dates and party. Brooklyn, Cambridge and Wilkes-Barre we're looking your way dawgs. Cappin' it off proper in the city of brotherly love. Rad Fest is gonna be sick as fuck. With any luck I won't end up in the hospital again. Other than that we're super stoked. A bunch of our good friends are playing the same venue/show as we are down there so it should be off the chain. I'm especially excited for the Riot Before and Captain We're Sinking jawns. My mosh helmet is already packed in the van!

Which member of The Holy Mess is least likely to be nominated People Magazine's Sexiest Man Alive and why?

I'm gonna field this one with our extraneous fifth member and merch guy Jesse who is exiled in the Poconos. I really don't feel as though he's tall enough to qualify although I personally find him to be incredibly attractive. The runner up would have to be our man Rob as his daddy issues disqualify him from the running by a long shot. And by long shot I mean a Tiger Woods 320 yard drive on a ten foot green. Speaking of green…

How was the decision made to add a second guitarist? Was it, you guys were feeling old and you decided to overcompensate by adding a geezer to the band?

So how do you guys make a living when you're not off playing somewhere given all the hospital bills, warrants in Virginia and stuff?

Well I fold a lot of shirts and Yossie prints a lot of shirts and Scott and Rob wear a lot of shirts so work gets done. This economy is a bit of a bummer though. Rob definitely wears less shirts than last year for sure. As far as hospitals are concerned… I still owe a bunch of money to the Gainesville hospital from last years Fest and they call me about it everyday. And they always switch numbers so sometimes I pick up. Its depressing really. I'm waiting for the big 'O' to get this health care thing off the ground enough that I can party without fear of expensive repercussions.

Tours: Minus the Bear

Music: This or the Apocalypse: "Charmer"