New wave and punk pioneers Devo have posted the track listing for their upcoming album. The band took an unusual route for the album, by launching an Official Song Study. The band posted portions of each of the tracks they recorded for the album and asked fans to rank and vote about which songs would appear on the final full length. Of the sixteen songs shown in this way, fans and study participants selected the 12 that will appear on the album itself. The record is titled Something For Everybody and is due out June 15, 2010 via Warner. It's their first since 1990's Smooth Noodle Maps. 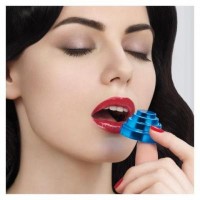