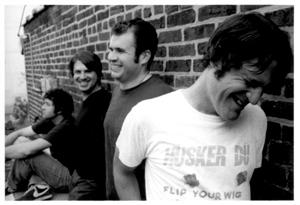 Contributed by shindo, Posted by Adam White 12 years ago

New Bomb Turks frontman Eric Davidson getting set to hit the stage to promote his recently released new book. We Never Learn: The Gunk Punk Undergut chronicles the international garage-rock scene from 1988 to 2001. Davidson, a longtime rock journalist who's written and edited for the Village Voice, CMJ, and the San Francisco Bay Guardian, traces the movement from the mid-80s Ohio glam-punk act Death of Samantha. Along the way he interviews a number of musicians and bands including Billy Childish, The Dwarves, the Raunch Hands, Gaunt, the Gories, The Hives, The Donnas, The Dirtbombs and Rocket From The Crypt to arrive at modern acts like the Black Lips, King Khan and the Shrines and the late Jay Reatard. You can find further details and quotes from Davidson in a story in Spinner. We Never Learn hit stores on June 1st published by Backbeat Books.

Davidson will promote the book with a New Bomb Turks reunion show on June 26th at the Bell House in Brooklyn, New York. He'll be reading selections from the We Never Learn before taking the stage with the band.