Reel Big Fish have announced the details about their recently announced Best Of collection. The record is titled A Best of Us for the Rest of Us and is due out July 20, 2010 exclusively through Best Buy. As reported originally, the record will feature 22 songs from the band's catalog. What has also been confirmed is that all 22 songs will be newly recorded due to the fact that the band's major label, Jive Records, owns the older masters from the band's early releases.

Along with the best of disc, the band is promising a 14-song "skatoustic" disc featuring renditions of tracks in that style. 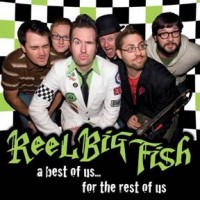 A Best of Us for the Rest of Us

Tours: Japandroids (Europe; with the Walkmen; with Frog Eyes)