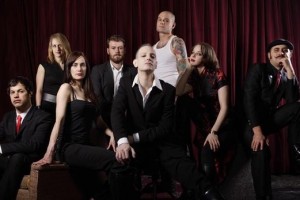 It looks like World/Inferno Friendship Society might be in the middle of some tough times. Composed of an ever revolving cast of miscreants and sounding like a cross between prohibition jazz and the Dead Kennedys, World/Inferno has forged a name for itself through explosive live shows and a wry disdain for authority. But, while their earlier albums were filled with joyous odes to thievery, flipping off cops, and just generally being a gleeful rascal, the new tunes that have been popping up live and on the net seem to have a more somber tone.

Instead of being chased by cops through a restaurant's kitchen, the characters in the new songs have their backs against the walls. Instead of chewing out former lovers, they lament that they will never see each other again. But are things really that bad or is the band just tugging at our heart strings to see the effect? Recently, Punknews interviewer John Gentile chatted with World/Inferno's lead singer Jack Terricloth to get the scoop on the group's new LP, how the fight against capitalism is going, and why the group has lost so many members as of late.

What's the story with the new album?

The name of the new record is The Anarchy and the Ecstasy. The title comes from a [William Butler] Yeats poem. It's funny, because the poem was written 150 years ago, but it seems to be about me. Even though every day you fall, you always get up again. It seems very very appropriate. We're still on Chunksaah and it will come put on Hallowmas. [Halloween]

Our new record is very, very bluegrass. Celtic music is very, very bluegrass. That is just how things developed. Actually, it almost is bluegrass since I'm playing guitar. Lucky, who has left the band, is a wonderful guitar player- I would never be able to do what he does. But now, our piano player is totally going off. There are lot more female singers on this record. Less guitar solos has given us a lot more room for the other parts of the band to branch out.

On the new album, there is a song called "Lean Time for Heroes". Why is it lean time for heroes?

I seem to be vaguely famous, but I am still stealing tips off tables. It's just very funny being in this position. People are interested in the music but the funds are running ever lower.

The new album is the only one to contain almost completely new material. Is that scary?

Oh no, it's fine. With Addicted to Bad Ideas, the album about actor Peter Lorre, we had many Peter Lorre things along the way. But, this is all new material. There are five new songs besides the ones on the demo that is floating around the internet.

Speaking of the demo, how do you feel about people sharing a demo of your stuff ahead of the release date?

Well, I'm sure our label would be pissed off. But you know, we give away things for free. I couldn't care less about the demos. Songs want to be free. Songs want you to whistle them! I don't do this for the money. There is no money. I do it for the art. But, yeah, I am probably losing the fight.

It was a success artistically, but there's no damn money in music! It paid our bills, while we were doing it. But, the producer asked me if we were ever going to pay him back. We said "No!" It was a great deal of fun. I'm glad we did art for art's sake.

It's hard for bands with three members to hit the road and not go broke. Your band has like 8 or 9 people. How the hell do you guys do it?

Everybody get tens bucks a day and fed. We all have real life jobs which we have to return to, which is a drag. But, When were on the road, we totally make it work.

Well, it sounds tough. You know, in the past year or so, World/Inferno has lost three of its more noticeable members, accordion player Franz Nicolay, Guitar player Lucky Strano, and drummer Brian Viglione. What's the deal?

We're a secret society and not really a band. It always shocks me when people are shocked that one person is not on the record. But, our original drummer Ben Kotch is playing drums now. He's back. I'm very, very excited.

As for the other band members, I'm going to Franz's wedding this fall. Franz is always out for Franz, and I congratulate him for that and for joining Against Me!. Lucky- I'm a little confused about, because heâs the best, coolest guitar player. I'm not really sure why Brian left. I guess his strident ambition didn't really work with our laconic idealism… I was more riots, he was more encores.

You're not a control freak, are you?

Your birth name is Pietro Ventantonio, but you always refer to yourself as Jack. Is Jack Terricloth a character that you play for World/Inferno, or are you really completely Jack Terricloth?

That's a tough question. I introduce myself as Jack wherever I go. I go by Jack in the airport. When people call, "Pietro!" I don't look up… for better or for worse.

I didn't actually have all that much to do with it. Roadrunner approached us and said they wanted to do an updated Comedian Harmonists release. The Comedian Harmonists were a band in Germany in the 1920s that were a close harmony group, comparable to the Ink Spots. Roadrunner asked us to do this record, and they paid us some money and they paid us to make a demo in 2005, so we did it. We got a bass singer for five part harmony. It was wonderful and so much fun. They paid for it, but never released it because they said it was not what they were looking for. So then, after three or four years the rights ran out for those songs. So we released them.

Would you like to relate the story behind the shoes on the cover of Vox Inferne and the associated song on the b-side?

We were on tour in Istanbul. We were only there like 36 hours. I've never been to Asia. The Bosporus runs through Turkey. On one side is Europe and one side is Asia. I was like "I'd really like to go to Asia," and a local guy goes, "I can arrange this."

He gets a fishing boat, a small motor boat, but I didn't tell the rest of the band were I was going. So were on a motor boat in the middle of the Bosporus and the sun is coming up, the motor suddenly dies and then all of the sudden a giant oil tanker starts to move towards us! We were trying to fix the engine while the giant tanker is getting bigger and bigger. We were getting tossed all over the water from the waves. For some reason, I'm good with engines, so I finally get the engine going. We were literally 14 feet from this giant boat, and as soon as the engine starts we just headed back to shore. I never did get to the shore of Asia.

So, I had been gone like six hours, and the rest of the band is totally pissed off at me. So when I got back, they took my brand new beautiful two toned shoes just to punish me and drop them in the bath tub. I'm just glad to be be alive… I almost drowned .That's life in the gang.

On your live album from 2001, you relate a story about how a friend that has abandoned punk rock for a more traditional lifestyle asks you how you keep doing what you do, and you reply, "Because I hate you and I'm trying to show you that you're wrong." How is the battle going?

It's still going and it is the exact same battle. You know, I'm not on Facebook, but my sister is, and all my old punk rock friends are getting in touch with her to get in touch with me. All they want to talk about is back then, but it's not back then for me! Its' a long hard struggle and it never ends. Heh… what's the option? Give up? I'm not doing that!