The Fest 9 confirmed for Halloween 2010 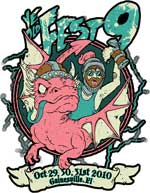 Contributed by Misanthropee, Posted by Aubin Paul No Idea 12 years ago

The promoters have officially announced The Fest IX for Halloween weekend 2010. So far no bands have been (officially) confirmed but a early July website launch promises to reveal a "ton of bands." Pricing will be $65 in advance/ $80 during the Fest weekend

A band application has been posted on the placeholder website so interested bands can throw their hats in now.