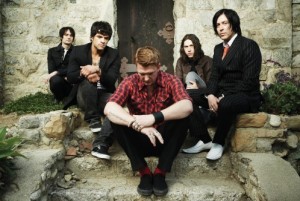 Queens of the Stone Age will be reissuing their 2000 album, Rated R. The band is celebrating the tenth anniversary of the critically acclaimed album with a double CD reissue including a second disc with six B-sides and the band's summer 2000 Reading Festival concert--featuring nine previously unreleased songs, including live versions of Rated R's "Feel Good Hit Of The Summer," "The Lost Art Of Keeping A Secret," "Better Living Through Chemistry" and "Quick And To The Pointless." The B-sides are "Ode To Clarissa"; "You're So Vague," a spoof of Carly Simon's "You're So Vain"; covers of Romeo Void's "Never Say Never" and the Kinks' "Who'll Be The Next In Line"; a live version of the album's "Monsters In The Parasol"; and a re-recording of "Born To Hula," an early QOTSA song. The other Reading Festival tracks are concert takes on "Ode To Clarissa," three songs from the band's debut album ("Regular John," "Avon" and "You Can't Quit Me, Baby"), and "Millionaire," a song originally from Josh Homme side project Desert Sessions.

NME described the album as "the best, most important rock album for years--No gimmicks, no postmodern guilt-trip bullshit, just punk rock space-cadet genius," It's due out August 3, 2010.