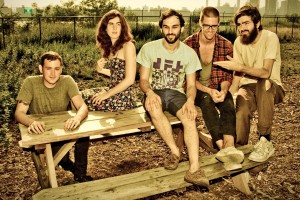 So you guys are on a little break from â what seems like â the never-ending "Monitour?"
Yeah, Iâm at home in Brooklyn right now and itâs a fairly never-ending tour. We're pretty much on summer vacation right now. We have a pretty light load over the last couple months.

How have you been keeping busy?
Iâve been hanging out a lot, and playing on the internet and stuff. Iâve been playing with my guitar and whatnot, just pretty much being lazy and decompressing.

Your newest album, The Monitor, is loosely based on your move from Glen Rock, New Jersey to Boston, Massachusetts and, of course, the Civil War. Was there anything that particularly prompted the Brooklyn move, in terms of creativity?
Well, this place certainly has the infrastructure thatâs conducive to creativity. But it was mostly for a woman. The same reason I do every foolish thing. When you got a good woman you have to follow her wherever she wants to go. And if she happens to live in Brooklyn, then so be it. Itâs a good deal, Iâd say.

I guess be thankful that you didnât fall in love with someone from rural Oklahoma. (Sorry, Oklahoma!)
Thatâs true. Thank heavens! Plus itâd be quite a commute for practice. The fact of it is, itâs just a sensible thing. This is where a lot of young people from New Jersey end up when they try to start their adult lives. Or thereâs also Hoboken, NJ, which is a little too bro-ish for me.

It seems like thereâs somewhat of a duality present with Titus Andronicus. Where, at heart, you guys/girl are punks. But on the other end of the spectrum, a good portion of your fans are very much part of the indie/hipster community and your band kind of ends up being immersed in that by de facto.
You know, Iâve actually been thinking about this a lot lately, these past couple days. Iâve been listening to this compilation a lot from the mid 80s called Bands That Could Be God. Itâs a compilation that the guy who started Matador Records (Gerard Cosloy) put together of all of these Boston bands. Half of it is pretty regular early 80s hardcore music and the other half has bands that are kind of weird. Bands that we would consider indie rock bands now. More like indie-alternative bands as opposed to traditional hardcore bands.

Well that got me thinking about how hardcore and indie rock all kinda came from the same place. Theyâre all kinda derivative of punk rockâthey all came from the same place. And I was thinking about back when punk was a new thing in the early 80s. Of course, I wasnât there so I canât say for certain. But listening to the compilation, it makes me think about how back then punk wasn't necessarily a set of ascetic parameters, but rather an invitation to explore whatever kind of stuff you wanted. And you could still keep the visceral spirit that was consistent amongst all of what would be called "punk bands" or "indie rock bands" or whatever. It seems to me that they were all kind of the same kind of thing back then, ya know.

I was also listening to some of the old Dischord compilations and it was the same deal. It just kind of reaffirms for me the notion that indie rock and punk have become if not opposing terms, then theyâre in their own insulated world. And thatâs not something that I consider a productive outcome of the idea of punk music, which is the common ancestor of all of it. Thinking about stuff like that makes me want to refrain from making those distinctions, especially when making our music.

One of the things we talk about on our record is how humans want to define themselves in terms of "self" and "others." Maybe thatâs kind of the same thingâsomeone thinks theyâre foremost a punk or hardcore guy, or an indie rocker for that matter. And that would lead them to believe that music kind of becomes a lifestyle accessory and that can prevent you from exploring other kinds of music that could also be enriching.

On a similar note, I donât see your band as one that puts any kind of parameters on your sound. Case in point: while itâs clear that your songwriting is very much firmly rooted in punk rock, youâre never one to shy away from a rippinâ guitar solo.
Yeah, my favorite guitar players would be people who have the energy and vitality of punk, but donât take that as being a trap. Like J. Mascis from Dinosaur Jr. and Carrie Brownstein of Sleater-Kinney. They were some of my favorites. Mostly those two, I suppose. And 10000 Marbles of Fucked Up, heâs one of my favorites right now. These are all people that kind of straddle that line by taking the energy and urgency of punk, but also punkâs original premise that within that context you can do whatever you want. And maybe the appreciation of urgency and earnestness is what gets lost on some indie rockers.

Changing gears a bit, you guys just finished a huge leg of touring where all of your gigs were at independent record stores. It seems like with The Monitor you really made a pushâpromotion-wiseâwith this album. I would imagine that could be a real bull but you really grabbed it by the horns.
You know, this is our job and our life. Weâre at a point where we want to take it very serious. We're not really interested in half-assing anything, really. Our record label is pretty serious too about that kind of stuff. So they set up that record store tour for us. And we wanted to make a concerted effort and try our hardest to make sure that everyone that might be inclined to hear the album had a chance to do so.

What were some of the unexpected advantages in playing the record stores as opposed to clubs?
From a band standpoint, that was right at the beginning of a big tour. And that was the first tour that this particular lineup of the band had ever done. We had two people that had never really played with us aside from a couple shows. So that was a good low-key environment to kind of cut our teeth as an ensemble. But, also, we played all independently and locally owned record stores. We like to stack our trips with local business and stuff.

Those two new members that you mentionedâ¦ Iâve read both of them have interesting backgrounds.
Yeah, Amy (Klein) worked for the city where she would go out and do investigations about police misconduct. And Dave (Robbins), well he has spent the last few years in higher education. I think he has masterâs in Information Systems. But when he was in high school he was a big star baseball player. And he got scouted briefly by the Oakland Aâs because he had a really good lefty fastball. Something like 88 mph.

They really add a great dynamic to your band.
True. Theyâre both extremely talented, wonderful people. And, hopefully, weâll have the benefit of their services for a long time.

Would you like to leave the fair readers of Punknews with any parting words?
Meat is murder!