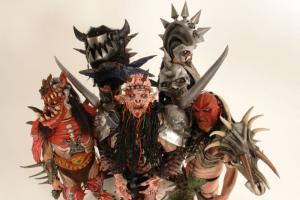 GWAR, the always controversial, always violent, band of intergalactic marauders is seeing a sudden resurgence of popularity in their 25th year of brutalizing Earth's denizens. In addition to recently releasing their highest charting album to date, Lust in Space, Gwar recently was, surprisingly, the closing act of the modern peace and love music festival, Bonnaroo. Composed of aliens from throughout the galaxy, Gwar made a name for itself in the early 90's by terrorizing and enslaving humans all while playing crushing heavy metal. While they faded from public fear in the end of the last millennia, they've recently (quite literally) exploded back on the scene, cutting some of their tightest and loudest tunes to date. In order to get the scoop on the resurgence, PunkNews recently sent interviewer John Gentile on assignment, where he traveled to Gwar's fortress in Antarctica to talk to one of Gwar's more notable slaves, Dave Brockie, only to have the interview interrupted by the band's fearsome and vile vocalist…

After weeks of searching, I finally found myself a pilot, that although stripped of his license, was willing to fly me to Gwar's fortress in Antarctica. After I arrived at the massive structure which was forged by cutting into a glacier, Gwar's longest surviving slave, Dave Brockie, motioned to me that we had to be quiet. Furtively, we crept down a long hall, passing rusty cages, mounds of used syringes and piles of carcasses. As we maneuvered though the icy fortress, screams of agony and despair slid down the halls and up my spine. Finally, we reached a small room where the following interview took place:

In the early 90's, Gwar was getting arrested by the police and was featured on multiple talk shows about how horrible they were. Now, Gwar is the closing act at Bonnaroo. Has Gwar achieved some sort of main stream acceptance?
Certainly not! Gwar is still more of a curiosity. We're still the ultimate freak show. We get those mainstream opportunities now and then, but, we won't play Bonnaroo next year or ever again. But, then again, as much as I don't want to admit it, I'm constantly presented with proof that Gwar is bigger than we think it is. The Bonnaroo show was amazing. It was ironic because Bonnaroo is this hippie festival and it was one of the first mainstream events that let Gwar play. They were very careful. Other heavy bands have played there, but not to the notoriety that Gwar did.

The first thing that Rolling Stone Magazine mentioned about you in their Bonnaroo coverage was that your fans were blood covered. Do you ever feel that the bloody theatrics take away from Gwar's other political and social messages?
No, I think it makes them juicier! It adds to it. It makes it better. It's like the juice and meat of it… Our message is the juice and the meat that we are beating in front of everybody. I've never thought what it would be like to do Gwar without spew. You know, the first few years our spew was incredibly limited. It wasn't until we got the pressure hoses that we were really able to blow spew over the audience.

There's a recent interview where you talk about how Gwar was rising in popularity in the 90's, only to have it snatched away by Rob Zombie… You're on the rise again. Are you fearful that the same thing might happen?
Not at all. I'm not gonna talk bad about anybody else's success. I think back then we didn't realize how long our legs were. We were afraid it would end. There was a lot of different stuff that we were almost involved in. We were posed for the Beavis and Butthead movie- next thing, Rob Zombie takes the whole thing over. We've taken a lot of hits. It's not really one stupid thing. It's a continuation of stupid things. We are beginning to get more and more confidence. When you can finally get away with murder, people expect you to murder and get away with it. Gwar murders people every night.

Gwar has been promoting a new online featured called GwarTV. What exactly is it?
Well, it's just a website where Gwar fans can go and be able to partake of forbidden fruits .. Its a web tv channel. It's just a webt tv station where you can, in one spot, watch all the different cool Gwar video stuff. We're kind of doing the same thing as Metal Blade tv, and trying to provide a free thing for the fans. We want to make ours a little more exclusive so we can do our own commentary and maybe get some tour content up there. In a year we hope to have some live shows and full programming. We want to model it after public access. We want to have a lot of fun with Gwar and maybe make a little money so we don't have to do 300 shows a year.

The last two Gwar albums have been concept albums telling tales about how Gwar went into space and journeyed into hell. Before that, Gwar had two albums that were more imagery than story based. What's the next one going to be like?
We pretty much go between albums that are more imagery and ones that tell a story. On the imagery ones, the themes are there, the symbols are there, but it's not like a big over riding plot line. The next record will be more imagery based than the last two, whoch had big, complicated plot lines.

What does the new record sound like?
It's heavy, it's hard, it's fast, it's being produced by Cory Smoot. We are getting better. When you work with the same people on the same studio stuff, making better noises, shit is gonna sound better and better, so the new stuff sounds really awesome. It's stripped back and raw. It's unmixed and really clean right now. You can really hear the different instruments really well. It's gonna be a random chaotic statement. Gwar is still working with their spaceship, flying around though time and space.

At this point in the interview, a huge crash thundered down the hall, and the door to room which Dave and I were in exploded off the wall. Suddenly, Dave grew pale and screamed "Oh no, not him!" Before I could flee, Oderus Urungus, fearsome spiked alien and vocalist of Gwar stomped into the room.

Although Dave covered his head, Oderus picked him up by his ears like a rag doll, and pummeled him into a bloody mass before tossing him into the corner of the room, leaving the slave an unconscious mass of blubber, bone, and tears. Oderus then assumed Dave's chair. A fearsome creature form light years beyond earth, he somewhat reassembled a cross between Freddy Krueger and the Predator. But while both of those characters were unwavering in their deadly demeanors, Oderus seem to transgress from boiling rage to consuming depression to envy to pride with the blink of his eye. Apparently, interested in his own interview, Oderus then crossed his legs while stroking his tentacle beard. Certain that I was but moments from my maker, I hobbled together questions as quickly as I could to buy myself a few more moments of life.

So… uh… uh… eh… at Bonnaroo, comedian Margaret Cho came on stage and gave you a bee-jay. How was it?
Oh gosh! She was my sexual plaything! Her face broke open like a chicken pot pie and then she regenerated quickly form my syphilitic puss. Her name is now Margaret Chode! Muhahaha!

You are an intergalactic correspondent for Fox's Red Eye late night program. How do we know that you are a reliable news source?
You don't! In fact, I make at least half of that shit up! I told them that I'll just lie and they just put me on the air anyway and I say whatever the fuck I want.

You've stated that you eat crack cocaine as your daily sustenance… so I'm confused…is crack good for you or is crack bad for you?
Oh, crack is good for anyone, not just me! Good, good, good… so good… I just loooove the way it tastes!

A lot of publications reviewed Bonnaroo, but many just skipped over Gwar despite the fact that you guys were the closing set. How does that make you feel?
Vengeful! Wrathful! Angry! Hurtful! People will pay! Bodies will roll! Lives will burn!

You've just got back from space. What's next for your band of intergalactic killers?
We're working on our new album! It might be called Gwar's Bloody Pit of Horror!

Also, if you were concerned, don't worry. John was able to sneak out of the fortress in tact while the band fell into self induced drug comas.

Tours: Against Me! / The Flatliners / Young Livers (Canada)

Contests: Win tickets to see Murphy's Law on a boat