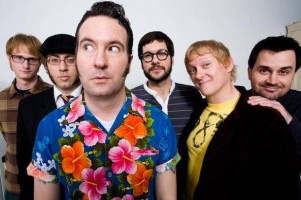 by Richard Verducci Interviews 13 years ago

As one of the last original members of ska-punk pioneers Reel Big Fish, trombonist, Dan Regan has seen a lot in the ska scene. The band is currently on Warped Tour supporting their greatest hits album Best Of Us For The Rest Of Us. In an interview with Alex Eschbach, Regan shared his thoughts on Sublime (With Rome), the dynamic of the band, the current state of ska and tackled the criticisms his band has faced over the years.

Howâs Warped Tour been so far?
Warped Tourâs been great. Weâve only been out for a few days. So we havenât formed the calluses that many of the other bands have. But we have a few years on the Warped Tour so we get back in the saddle pretty quickly. Itâs been nice and hot.

I saw you guys play in Oklahoma City a few weeks ago and I was wondering whereâs Rabbit [Ryland Steen]?
He is on tour with the television dynamo known as Kris Allen. And. uh, heâs been off and on playing gigs with them for the last year, year and a half. They finally like wanted to do a tour. He went off and did a tour with them and left us in the capable hands of a gentlemen named Camear. Who in no at all learned all the drum parts and was willing to fill in with us brigands. But he sends his regards. Ryland sends his regards because heâs out there lip synching with a backing track and stuff. So he really misses playing real drums.

How did Ryland end up getting that gig?
I donât know. Heâs one of those guys thatâs always got his ear to the ground in the sort of studio scene in Los Angeles. He plays on a lot of peoples demo records. A lot of bands they get signed to a record label and they get a producer and everything and they go in and make their record. They record and send the band home. The producer calls Ryland and says, "Can you do redo these drum parts? These kids suck." Heâs one of the drum doctors in the Hollywood scene out there. These kids plan on selling records and think theyâre really playing those drums. But heâs ours. Donât worry. Heâs never leaving.

How did you guys pick what songs were going to be on the "Best Of" record?
We kind of just rerecorded everything. Weâve been working on it for two years in between tours when we get home. The process of building a studio and practice space in this warehouse that we have. So itâs sort of been this project that was both for the studio and to reclaim a lot of the recordings that we have. I mean we own the rights to the songs, obviously. We wrote them. But over the years theyâve been sort of shuffled around from record label to record label. We were like, "We should have our own versions of the songs. Especially now that weâre in our thirties and can play them better when we recorded when we eighteen-years-old or something. Letâs get good versions." I think Aaron went on the selection process probably based on set list of what people like to here. Their not changed too much, really. We didnât change the arrangements. We kind of cleaned it up a bit. When we first started off we were really trying hard to show that we were good musicians. So we would write all these complicated parts that may or may not serve the song. But ultimately itâs the same music. Itâs just played a little bit better. We use to have guys in the band that we were like, "He canât really play but heâs hilarious." And now itâs a little bit different priority.

How did you guys pick which songs you were going to play acoustically for the record?
Thatâs one of those Aaron things where he lost sleep over it for a few weeks and finally settled on the ones he chose. Heâs kind of a stickler for that kind of stuff. Iâm sure theyâre all on some list somewhere has someoneâs favorite Reel Big Fish song. We canât really just put it out without playing "Beer" on it.

You guys are also known for your covers. Is that how you go about picking those songs?
Yeah, usually. When we get together after not hanging out awhile and we start jamming we usually start with cover songs. Everyoneâs always learning music and trying to one up each other. So we start with a couple covers to get on track and sometimes they stick. A lot of time itâll just be a sound check and someone will be jamming off a cover and it sticks. Or a lot of time Aaron just says, "Hey weâre going to do this song. Iâve wanted to do it since I was fourteen-years-old and now weâre going to do it."

Well, thatâs a question I wanted to ask you. A lot of people get the impression that in the band itâs Aaronâs band and you guys get frustrated. Is there any truth to that?
Yeah, yeah. But Iâm sure itâs like that in every band. I mean heâs the songwriter and the leader and everything like that it. So it gets frustrating. But thatâs how it goes. One of the ways we stayed together for so long is by giving each other space and understanding the roles. As much as I may agree or disagree with Aaron at times I donât want his job. Iâd hate to do what he does. Heâs got a lot of pressure on his shoulders. I offer my two cents. Iâm not putting my heart out there the way he is. [laughs]

Thatâs one thing Iâve always found interesting is Iâve felt like you guys have always had more criticism compared to your contemporaries. People say that you guys write only happy songs. But lyrically itâs always been more snarky and self-loathing. Why do you that that is?
Well, I think weâre all very self-deprecating. Itâs part of our humor. We like comedy a lot. Itâs easy to make fun of yourself. Weâre not the kind of band thatâs going to write songs about big world issues and things like that. I mean maybe I would if I had a band. But itâs not something that Aaronâs interested in. So we figure itâs better to be honest and write about what we know and thatâs being in a band and the pitfalls of it.

Speaking of a band that youâre in, how has Black Casper