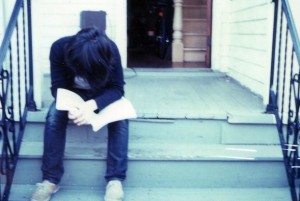 A couple years ago, Punknews interviewer David Siffert walked into a bar in the middle of nowhere in Brooklyn. He had gotten lost on the way, so he was late. On walking into the show room, he was assaulted by one of the most glorious screams he had ever heard. He looked and saw a very small person, in a very red dress, holding a guitar, the head of a microphone literally inside of her mouth, belting out absolutely soul-crushing sounds. Meet Marissa Paternoster, guitarist and singer for Screaming Females and sole member of Noun.

Marissa has been extremely busy lately. Her band, Screaming Females, put out possibly the best album to come out last year in Power Move. This year they have already released an outstanding singles compilation, toured the country with Ted Leo, and had some serious van trouble. They have also recorded the follow-up to Power Move, Castle Talk, which will be released on September 14. Somehow this was not enough for Marissa, so she recorded her second solo album, Holy Hell, under the moniker Noun. In all of her free time, she decided to answer some questions for the 'Org.

Thanks so much for agreeing to do this interview. Let's start off with something some people might not know about you: you are an amazing artist and have done the artwork for many Screaming Females albums and flyers. How did you get into drawing? What are your influences, and what are you trying to do when you draw?
I've been drawing for as long as I can remember. My father and my mother are both artistically inclined and provided me a great foundation of influences: Basquiat, Diane Arbus, Keith Herring, and the like. Ever since I was a little girl, I've had plans to be an artist. I currently draw influences from the likes of David Shrigley, Marcel Dumas, Henry Darger, Howard Finster, and quite a few cartoonists like David B. and Joulie Doucet.

On to music, when did you start playing guitar? What got you into it?
I began to play guitar when I was about fourteen. I had just gotten into rock music around then. I was listening to Nirvana (typical!) in my room when my father walked in and said, "Hey, I can teach you how to play this; do you want me to show you how?" So I said sure, and for some unknown reason, I got super-duper addicted to play guitar, and I'd sit in my father's office for hours and hours pluckin' away. I was never, EVER interested in playing the goddamn thing, and I have no idea why I was so apt to sit on my little butt for hours strumming away….but I did, and that's that.

I was listening to Power Move with my brother (who is a musician). At one point, he commented that you sing with the vocabulary of a guitar. I am not a musician, so this made no sense to me, but it sounded profound. What kind of role do you feel your voice plays in your songs?
When it is time to write lyrics for a Screaming Females song, the actual music is already completed. Of course, it is subject to change, but I do my best to work around the structure and create a melody and lyrical cadence that will suit the song. Words and their meanings are important, but most of all, phonetics and the sound of words are what matter most to me.

How do you distinguish a Screaming Females song from a Noun song? What makes you want to keep the two separate?
Screaming Females is a group project. We all work on our songs together and build our own parts. Ideas are exchanged, and often times I do things in Screaming Females songs that I would never even think to do in a Noun song because Mike or Jarrett make a suggestion or put a cool idea in my head that I wouldn't have had otherwise. When you write songs by your lonesome, no one is there and you have total authority over the song. It can be fun to have that sort of power, but it also makes it much more difficult to make something interesting.

How do you go about the songwriting process? Who else is involved?
Noun songs are typically written on whim whilst plucking random phrases out on a guitar or piano. Screaming Females songs are written in a very similar way - we get together, play lots of heavy metal riffs, and scream expletives in my grandmother's basement until something sounds radical. Then we make a song.

In your opinion, what makes a song a good song? Feel free to answer this however you want.
I mean…there are a lot of songs that I really like that are totally and completely different, and I think that if I sat down and was forced to find something likable about a shitty song, I could probably do it. You know, "Wow, I really like the reverb decay on the snare in this Nickleback song" or something like that.

What are some bands that we should know about that maybe we don't know about? And don't just pick your friends!
Uhm….I REALLY like this band from New Zealand called Batrider. They aren't my friends, but I wish they were. I really like Nodzzz from San Francisco, and they aren't my friends either, but we met once. Shellshag from NYC are the best band in the world, and they are my very best friends. I like P.S. Eliot from Alabama, and we very recently became friends.

What are your favorite venues?
There are a lot of neat places in this great, great nation. Too many to list. I think one of the coolest places we've been in a super-secret warehouse in San Pedro, CA that operates as a venue and as an S&M brothel-type joint. There were cages and leather straps dangling from the ceilings and a huge cross that spun on an axis. It was absolutely amazing, and we had a fantastic show there.

Other than art and music, what do you like to do? Or, more broadly, what is something you like?
I don't do much besides make music and draw. I like to watch Degrassi and go to cat conventions. I really like cats.

Oh man, I love cats. I probably spend an hour a day looking at pictures of kittens on the internet. Do you have any favorite cat pictures or videos?
I am a huge proponent of enjoying cats in reality. While I do indulge in many a cat video, I have to refrain from showing you all the ones I enjoy because it would take way too long….

Help us get to know youâdescribe your personality a bit.
I like to watch nature documentaries and hang out with my lovely Grandmother and talk about what produce is on sale at the supermarket. I don't like hot weather or loud noises. I am deathly afraid of the ocean, and I hate jellyfish. My favorite type of dog is the greyhound, and my favorite vegetable is currently the beet. I am, of course, inclined to think that I am a relatively nice person, but I'm certain that some might disagree, which is fine--that's only natural.

Tell us a funny story! And then tell us what percentage of it is true.
When I "graduated" from pre-school, my nursery had a bit of a ceremony planned to commemorate the occasion. My pre-K was called "Unicorn University," and I have quite a few distinct memories from my time spent there - (wetting myself in my blue stretch pants and sneaking away from nap time to watch How the Grinch Stole Christmas). My Grandmother had taken me shopping, and we purchased a fluffy white dress for the ceremony, which according to her I had agreed to wear. When the commemorative event rolled around, I remember crying hysterically in my room, adamantly refusing to wear the poofy dress. Grandma was angry considering she spent a pretty penny on the dress, but eventually she resigned and agreed to dress me up in whatever I wanted. I picked out a black wool sweater and some black dungarees, despite the fact that it was the end of June and already quite hot. I can vividly recall trudging up to my nursery school commencement with a bloated, tear-streaked face, ostentatiously representing the goths of the nation. Consequently all of the family photos are of a very tiny Marissa all clad in black and crying hysterically, surrounded by other smiling toddlers wearing pink and white communion dresses. I was a miserable child then, and I am now a miserable adult. This story is 100% true - but I doubt it's hard to believe!

Is there anything else you would like to add?
Nope!