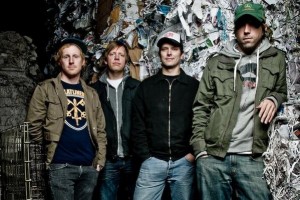 Vancouver, BC's Carpenter are set to hit the road this October in support of their new full length Sea to Sky. The band will head east across Canada from British Columbia through Ontario. There they'll join up with Paper and Plastick labelmates Cheap Girls for a tour. The pairing will play a trio of dates with Cobra Skulls and another three with Mockingbird Wish Me Luck before hopping the border to play Buffalo with Two Cow Garage. The tour will then be welcomed to New York City by Bomb The Music Industry! and Laura Stevenson and The Cans, with Laura's band joining them for some East Coast US dates afterwards.

Carpenter will release their new full-length Sea To Sky on September 2st via Goldstock Records in their native Canada and Paper and Plastick in the United States. It follows up 2008's Law of the Land.