Canada's Alexisonfire will be releasing a new digital-only release via iTunes this fall. The record is titled iTunes Originals and is due out September 28, 2010. The session encompasses interview clips of the band members reflecting on their career and revealing the inspirations behind their songs, along with album tracks and new live versions of some of their most well known songs. Alexisonfire recorded their iTunes Originals session in April 2010 and performed six tracks live in the studio specifically for this release. The interview segments are only available by purchasing the complete release. 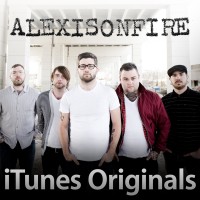