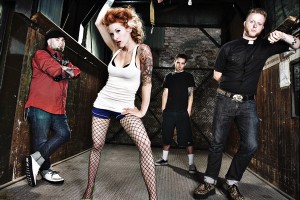 Toronto's The Creepshow will be releasing their first new studio album since signing to Hellcat Records last year. The band previously reissued Run For Your Life through the label last year.

The record is titled They All Fall Down and is due out October 5, 2010 via Hellcat. The band will be touring in support of the record starting September 30th.

Music: Atlantic/Pacific (ex-Texas is the Reason): "One of One"