Brokencyde have detailed their upcoming second album, Will Never Die. The album is due out November 9, 2010. The band made the following statement about the album:

With this whole album, we're putting our middle fingers in the air toward the entire industry. The album artwork is pretty much self explanatory. We want to smash everything and anything that stands in the way of us making music. We want to show all our detractors that all the hate they spew only fuels our music and makes us that much stronger.

They are, after all, a "fascinating phenomenon." 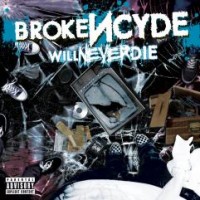