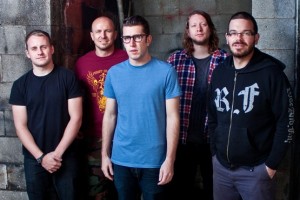 Fresh off the release of their fourth full length Symptons + Cures, Comeback Kid have embarked on their habitual trek of constant touring in jam-packed clubs, this time alongside the likes of A Wilhelm Scream, Living with Lions, Parkway Drive and Four Year Strong. Vocalist Andrew Neufeld walked the streets of Vancouver while chatting with Mark Millard about the new record, its direction and notably, where he's individually at now as opposed to three years ago when he first made his debut in the front man position.

Back in 2003, you guys released your first full length Turn It Around. Sitting here almost eight years later knowing youâve just put our your fourth record, whatâs the general vibe with Comeback Kid right now?
The general vibe right now is pretty common all around; everybodyâs in really high spirits. We had some shows this past month and weâve done some festivals, and weâve been touring here and there quite a bit, but we havenât really been back at it full time. Now that the records out, which weâve pretty much just been waiting for, we have like our whole next year planned out; a world tour kind of thing in the works. But weâre really excited to play our new songs, and weâre playing some places weâve never played before. A lot of the dates are part of tour packages we have coming up which are pretty outstanding. So weâre very stoked about it all.

Letâs talk about the record that has several people very stoked, Symptoms + Cures. Not only is it heavy hitting, but itâs generally more thought out and arranged than some of your previous work. What was the writing process like this time around?
The writing process was just Jeremy, Kyle and I, we get together; Jeremy and I will write the riffs on our own, and then weâll get together and practice for like three weeks and kind of just hash out both of our ideas. Then weâll just get back and write for another three or four weeks, and weâll try and record some stuff so we can kind of examine it and fix it up. Then weâll go on tour, then come back from tour and write some more for another month or something. We did a few more dates and then the last session we wrote was down in Australia before we did our tour called Soundwaves. We wrote a couple of songs there and then we flew straight to Toronto to record the album. So weâre always kind of going through these spurts where we heavily write it, and then have the opportunity to just mow it over as time went on, which allowed us to really give it a lot of thought.

In the studio, were there any musical revelations or discoveries? Or was it simply a natural process?
You know what man; it was pretty natural. Going into it, we had a pretty good idea of what we were going to do. Weâre not the kind of band that goes into the studio with a bunch of riffs and expects to make some songs out of it. We usually go into it with pretty much everything done; more just to document, you know? But the part that mostly surprised us on this record was the vocals because we were writing a lot of the stuff and the patterns in the studio as well for the vocals, so that is the most surprising thing, when youâre like, "Letâs listen to it," after you just recorded it. You hear it and youâre like, "Whoa! Okay, so this is what itâs gonna sound like," you know what I mean? So we definitely spent a lot of time on it, we even spent overtime on the vocals. I would be in the studio doing the vocals, then we had to go on another tour and then come back for mixing and so everything kind of took a little bit longer than anticipated, but we weâre very pleased with it still.

How much emphasis was placed on allowing the songs to translate in a live setting? I find vocally especially, examining a song like "G.M. Vincent & I," the aforementioned concept is quite evident.
We kind of wrote the record so that we could incorporate more songs into our live show because thatâs what we spend most of our time doing. We want to tour with an album that people enjoy listening to. But mainly, we just wanted to record songs that were fun to play and that as you said, would translate really well in a live setting. We kind of felt the album turned out, like we have some of our darker albums, but generally itâs just a more fun record and a brighter record. But yeah it all just goes to say weâve written this record so we can have fun with a lot of the songs live. Like last night in Victoria, we played some songs for the first time. We played four new songs, and two of them weâve never played. "The G.M. Vincent" song, like you mentioned, we played for the first time yesterday and like itâs crazy; the records only been out for like a couple of weeks and people are learning the songs already. So we really hope we can keep bringing out new songs and incorporating them into the shows.

Being your sophomore record as lead singer of the band, where are you at now as opposed to three years ago when Broadcasting… first came out?
I think itâs just a little bit different. With Broadcasting itâs kind of like a balance between me singing the way we use to and the way I wanted to. But also, I wanted to somehow channel the essence of Comeback Kid. So like back in the day, Scott and I would write a lot of lyrics together and write a lot of the vocal stuff together. Now, I mean obviously I wanted it to sound like Comeback Kid, you know? I didnât want it to be like, "Iâm the new singer, Iâm gonna sing totally different," I was never going to sing completely different but after three years of singing the set and doing everything, Iâve realized that my voice is naturally like a heavier sound than the older style of Comeback Kid, which was like a shout kind of thing. And so itâs definitely a heavier vocal style, and there are melodic elements to it obviously - but Iâm kind of just singing like I do liveâ¦ Yeah. (Laughter) Itâs just more natural this time around.

Is it important to differentiate yourself vocally from your other project, Sights and Sounds?
Yeah Iâm always trying to do something different. With Comeback Kid, the stuff that I write you can do a lot with it. Youâre just trying to find a natural sound for your body, you always need to just keep singing and practicing and thatâs how a good singer is really going to develop his voice. Like for example, weâre on tour with Living With Lions and Stu from Misery Signals just joined the band. They just played like the second or third show with him singing yesterday, and then theyâre gonna record after this tour. Thereâs no guarantees his voice thatâs gonna go on the record in a month or two is going to be like that after, you know what I mean? And also youâre gonna want to have different vocal styles when youâre playing different styles of music. You have to be sensitive to the song that youâre playing.

Being one third of the band who has been there right from the get go, what does Symptoms + Cures mean to you personally?
Iâm just really happy with our new record. Weâre still doing the same thing we intended to do when we first started the band, which was just to stick to a style of hardcore and try to be creative with it. Weâre musicians first and foremost so weâre just trying to keep ourselves straight headed and try to just keep producing music and going on tour â itâs just a pretty simple concept to us.

Lastly, the band moved away from Bill Stevenson, working with Erik Ratz and his partner Kenny Long instead. What was the motivation behind the switch, and ultimately, what did they bring to the table?
Well we wanted to work with them because, for one, we wanted to do the record in Canada. We figured we would be able to get more time and make it work a little bit more if we did it in Canada. And then we chose Ratz and Kenny because just based on the guys that we knew, they were doing some cool heavy stuff and then we met them before and they just seemed like really great guys. So going into it, we did some pre-production - we got all the songs written before we went into the recording process, but they were just really instrumental - they really helped with stuff like tempo mapping, and really helping you get the feeling of the song in different parts. For example, Kyle our drummer really enjoyed tracking the drums with them because they were just helpful with guiding the drums on this part, and making this part like groove a little bit more, you know? But they definitely have a different style of recording to what weâve done in the past. Itâs a very meticulous style of recording, but we feel like the album turned out a little bit more "tearing through the speakers" and thatâs really what we were going for; just a louder sound.