Alexisonfire have set a November 2, 2010 for their Dog's Blood EP which they announced in September of 2009. Co-produced by Alexisonfire and Jon Drew (F*cked Up, Tokyo Police Club, Quest For Fire, Arkells) the EP features three vocal tracks and one instrumental.

They're completely different-sounding songs and would probably never make it onto a full-length record. 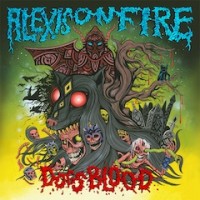 Me First and the Gimme Gimmes recording new music

Max Bemis and The Painful Splits: "Do the Dohnk"