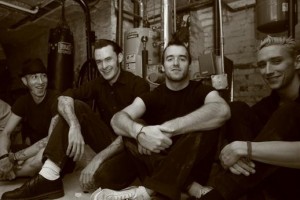 by Aubin Paul Paper and Plastick Dispatches 12 years ago

Today we've got a new tour blog from Boston's own Have Nots. The band is on their first UK and European tour and will also be supporting The Street Dogs' upcoming holiday shows. The band is continuing to support their debut Serf City USA.

Weâre here! Currently hurtling down the highway towards our show in Derby tonight, thanks to Ed, our driver (and tour manager and minder, pretty much, but weâre only really paying him to drive so letâs keep that part a secret), who rousted us bright and early and stuffed us in the vanâ¦but letâs begin at the beginning, shall we?

Flight was pretty uneventful; my seatmate was an American living in York who gave me a couple of tips about hanging out in the UK, the extent of which was donât tip anyoneâ¦fair enough, cos everything is wicked fucking expensive here anywayâ¦we arrived at Heathrow around 9pm local time, and arrived in England around midnight, thanks to the three hour wait in the immigration line due to the border guards being on strikeâ¦now, Iâm all for the right to earn a decent wage, but itâs not like theyâre breaking rocks with a hammer all day, is it? No, they sit there and stamp thingsâ¦I mean reallyâ¦but anywayâ¦customs was a breeze, and Ed met us at the baggage claimâ¦Jameson was reunited with his lady love, whoâs currently studying in London, and the two of them set off for a lovely little tryst in what turned out to be a bug-infested hostelâ¦the rest of us piled in the van and set out to find lodging for the nightâ¦an hour later, after checking three different Travelodges and calling ten more, we said fuck it and crashed in the van in a parking lotâ¦I slept under a table and woke up shaped like a question markâ¦welcome to the UK.

We woke up and drove to Camden (well, Ed drove, thank god, cos we would have def killed someone by now; this other side of the road thing is terrifyingâ¦the rest of us watched Dumb and Dumber in the back) where we met up with Jameson and wandered around Camden Market getting bullied by the Chinese food vendors ("No! You buy this now!) and perusing all the tourist crap they were sellingâ¦hit the original Dr. Martens shop and managed to get out of there without spending the equivalent of $300 american on shoes, despite the hard sell by the staff ("Pistols, Clash, yeah they all bought theirs here."), walked around, bought some shitty expensive coffees, and headed to the gig.

Our first European show! Played at this spot called The Gaff, in London, with this rad German ska-punk band called Braindead, and Billy No Mates, which is Duncan from Snuff and one of the dudes from Consumed and some other nice blokes (thatâs british for "dudes")â¦all the bands were awesome, and the crowd was into us, only a few people "dancing", but a bunch of folks watched us play and told us afterwards that they were really into it, so, yeah, popped our euro cherry, spot onâ¦pillaged the "dressing room" (manky basement that smelled like a toilet) on the way out and made off with a bunch of food and booze, then headed to Edâs friend Ollieâs house, where we hung out trading youtube vids for a few hours before crashing out on his bedroom floorâ¦I slept under the desk, infinitely more comfortable than sleeping under the table in the vanâ¦woke up bright and early (noon), had a shower (yes!), and Ollie made us breakfast, of eggs and mushrooms and beans and veggie sausage, as well as marmite on toast, which, it turns out, is not nearly as nasty as I had thoughtâ¦so thatâs pretty much it so farâ¦headed to Derby right now, wherever the hell that is, for the show tonightâ¦ok, more later, cheers! (which I was saying way before we ever got to the UK, so all you wankers, sod off!)

Darby was cool, played with some really good bands, especially Random Hand, if you donât know âem, check âem outâ¦itâs pretty cool to be playing in a place (the UK) where ska is so welcome, and prevalent, in the music scene…met some cool people, rocked the fuck out, ate some chicken, and fucked off on yet another epic adventure to find a Travelodgeâ¦successful this time, Ed wrangled us a good deal, Matt Steve and Ed got wasted on cheap Belgian beer next door, and Jams and I passed outâ¦

Woke up, had a shower, back in the van, off to Glasgow!…super stoked to see Scotland, the drive up was beautifulâ¦huge rolling green hills littered with sheep and these crazy yak looking highland cowsâ¦we were all very much looking forward to golfing past castles while eating haggis and drinking scotch after the gigâ¦none of those things ended up happening thoughâ¦the show was in the teeny tiny basement of a pub, which was cool cos with thirty people in there the place was packedâ¦Glasgow on a Saturday night was a total shitshow; saw a dude walk outside, casually projectile vomit all over the street, and then head back inside to continue drinking, all before nine oâclockâ¦hilariousâ¦we played a good set, and as soon as we were done some guy picks up his bagpipes and starts wailing awayâ¦everyone got well pissed, and we headed back to the promoterâs house to crashâ¦watched some Curb Your Enthusiasm, which was mildly entertaining, and then an amazing streetfight right outside the window with five girls and one sorry dude, which was supremely entertainingâ¦these bitches was FIERCEâ¦boots to the face, the whole nineâ¦meanwhile this poor guy was trying to break it up and getting fucked up for his effortsâ¦hate to say it, but Iâd bet on Glasgow ghetto girls over Southieâs best any dayâ¦after a couple rounds the combatants went their separate ways, talking shit over their shoulders as they walked off into the night, and we ate some Pot Noodle (aka ramen) and fell asleepâ¦Glasgow rulesâ¦ok, thatâll do for now, cheers!