MotÃ¶rhead announce 'The World Is Yours'

MotÃ¶rhead have announced that they will release a new album in December. The record is titled The World Is Yours and is due out December 13, 2010 . The album will again be produced by Cameron Webb and will be released through MotÃ¶rhead Music, which will be distributed by EMI Music Services. 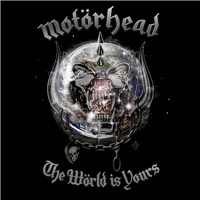