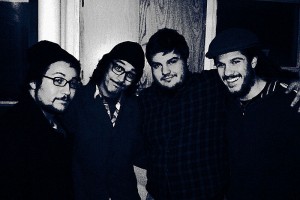 by Bryne Yancey Kiss of Death Dispatches 12 years ago

Downstate New York quartet Timeshares have sent us a couple of updates from the road. The group is currently touring down to The Fest 9 in Gainesville, FL, which is happening this weekend in case you forgot.

Last time myself, Jason, Mike and Eric were in Rochester, NY we got a healthy buzz going and at some point we got a few people to chant the word "SKILLET!" at the top of their lungs while Eric took the nearest skillet in the house and smacked Natoli in his gut with it. That was in January of this year.

Last night upon our return to Rochester dozens of people inhabiting our friends' house screamed "SKILLET!" in unison at the top of their lungs until every man and woman inside's stomach looked like fucking hamburger meat. Some even drew blood. It was frightful. Unfortunately I couldn't join in on the chants, on account of my being a tremendous weiner and having to preserve my voice because while we often forget it, we're a band, and this was night one of our current three week tour.

This tour will take us in two weeks to The Fest in Gainesville, FL. There's all kinds of wacky sentiment to this. For starters, having grown up playing the same stupid places in different stupid, dreadful high school bands as Mike, it's funny to think we're going to play the thing we always sorta wished one day we'd have a band that'd be invited to play. We did last year with the Knockdown, but this year we're going to be yellin' and spittin' all kinds of gross hell into each other's faces. Who'da thunk it?

One year ago this time of year we made the trip down to Florida in one brutal shot bearing the nerdy stokedness of finally playing said Fest, and the doom and gloom of knowing it was The Knockdown's last show. The remaining four of us recorded the first Timeshares demo and brought it with us to give to all of our friends as our way of saying we weren't done sleeping on their floors. There's something poignant about coming back a year later to say "No, seriously."

Eric and I are both comically poor on this jaunt. To allow us to both consume alcohol and actually continue to feed ourselves as well we declared this another cheap whiskey themed tour. This was tested once before on the storied Whiskey Winter tour of '08 with mixed results (We had some kind of Bubonic Fuck Plague that we relapsed back into about three times as a result of having whiskey for every meal), a tour whose infamy is only rivaled by the "Spring Time Wine From The Vine Feels So Fine When You Drink Wine in the Spring Time" Spring tour of the following year. Our economically sound plan backfired tremendously as we hadn't accounted for the possibility of, well, Eric finishing the whiskey. Doops!

The combined woes of our skillet battered guts don't seem to hold a candle to the Mexican Civil War taking place inside the de-dreadlocked head of our muscle bound stick wielder, Eric Bedell. In fewer words, last night was the debut of the oft spoken of, rarely seen, always feared Chuck The Fuck. Let me explain:

When we all realized we were wearing winter hats, it only seemed logical to refer to one another by our remarkably masculine middle names. Thusly, Fred (or Skip), Bill, Art (a.k.a. Fart, a.k.a. Art The Fart, a.k.a. Art Steezy), the aforementioned Chuck and myself, Fat Dave, were conceived, only to appear when winter caps and flannel meet, in moments of fleeting brilliance or in moments of vomit-outside-of-strange-hotels-in-strange-towns inducing whiskey consumption. Not naming names. Will anyone find this funny but us? Certainly not, and when have they ever before?

You also may have noticed an extra middle name in that batch. Once more we are accompanied by the inimitable Jarad (Bill) Needham. While I think at this point we've hit the road without him more than we have with him, it still feels a little strange to me when he's not here. He says the things I'm not allowed to, and is often my company in doing the absolute stupidest shit available to us on any given evening. He's also made excellent bed company.

While it may appear to you this tour's off to a bottom of the barrel doo-doo fest of a start, a house full of eager skilletting victims with the scars to prove it would (maybe?) argue fervently against you. As would a Hate Game (that's the van. you'll hear plenty.) filled with winter hatted swamp things fresh off an evening of sharing a stage with Lemuria and stuffed with yet ANOTHER grand slam Tim Avery breakfast (completely prepared in bacon grease no less. Love you Tim!) on their haggard way to Pittsburgh. Except Eric, he'd probably agree with you pretty hard. Then again, he has risen and is passing everyone Oreos.

Do I lie about the times and order I write this in every so often? I dunno, maybe. Does that mean I already know that everyone who stepped up in Pittsburgh got their poor asscheeks spanked to oblivion regardless of whether or not they were startlingly younger than us AND that I've somehow yet again developed a Bubonic Fuck Plague that's rapidly eating away at my spirit? Who the fuck knows man? This is rock and roll in written form. There ARE no rules.