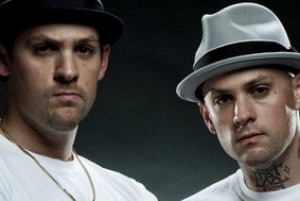 Even though they're based in LA now, Maryland band Good Charlotte are still very much in touch with their roots. After breaking into mainstream popularity with their second album, The Young and the Hopeless in 2002, the 4-piece outfit of best friends and brothers have steadily released records with the intent of mixing it up with each new release (to the distaste of some fans) while still staying true to themselves. Their fifth album, Cardiology, came out Tuesday, and with it, the band is toying with a few changes, including a new label, last minute producer change and more personal lyrics. Punknews interviewer Laila Hanson had the chance to chat with guitarist Benji Madden about some of the changes the band has faced, and how they're standing strong throughout it all.

You had pretty much the whole album finished back in January, but then you decided to scrap it and work on it again with Don Gilmore and move away from Howard Benson, who was your original producer. How did you get hooked up with Benson in the first place, and what made you decide to change back to Gilmore?
Howard Benson is a huge, successful producer. The label, our old label that we were on at the time [Epic], and our management were like, "This guy makes huge records. I really want you guys to try and look at this guy." I should have went with my gut. My gut was like, "You know, I don't really like his records." That's always how I made decisions in the past on producers. We've only really made records with two guys. The reason we worked with them is [that] I love their records. I love the production. So with Howard, I kind of went against my better judgment. And I was like, "Okay, you know what? I'll take these guys' opinions and try it out." Once we started down the road, obviously it didn't feel right right away, but I was like, "You know what? I'm gonna make a commitment and follow through with it," And the record kind of came out sounding like [all his other] records. It wasn't done, it was about 70 percent done. Once I heard a couple rough mixes, I was like, "I like the way the demos sounded better." There was some life in them, some vibe. It was a very frustrating decision. And we're not that band, we're not [pretentious], that's not us at all. But I also really appreciate and respect our fans, and I know that we, at the very least, have to give them our best. We have to give them a record that we believe in, otherwise they're not going to believe in it.

So I called Don Gilmore up, told him the situation. I wasn't calling him to say, "Hey, will you do a record with us?" I was just really frustrated, he's one of our oldest friends in the business, he made our first record, we've been friends for over 10 years. I was just like, "Dude, I don't know what to do, we just wasted a bunch of money, and I don't even want to finish this, I don't even want to listen to this, I don't want to redo it, I don't want to hear that shit again. We have to start over, what do you suggest?" He was making Bullet for My Valentine's record in Europe at the time, and he said, "I get back in two weeks, you should just take some time off, don't even think about the record. When I get back, let's just hang out and listen to music." So when he got back, he wanted to hear the demos, and he was like, "Man, this is some of the best stuff you've ever written." Every record we make, no matter if it's with him, I play him the songs. So he was like, "Tell you what, after Christmas, let's just go up to Vancouver and let's just start over. We'll take a handful of these songs that we really love and some that are really meaningful, and we'll write some new ones." So then we did, and right away, it was like none of that shit had ever happened. At the time, man it was frustrating. But in the end, it worked out the right way and it definitely made us grow. And for me, it was a good lesson of just listen to my instincts.

Can you tell me about the creative process on some of the new songs?
A song like "1979," everyone that has those records like The Young and the Hopeless and Chronicles, they know the story. They know the hard things that we went through when I was younger, but I never told them about when I was a little kid and, "Mom and Dad were still in love, it was a good year." I love that line. Because everyone knows what that feels like, before our innocence goes away, and that security.

When I went into the studio one night when we were working with Howard, he had edited out the entire first and second verse of that song and I'm like, "That's the most important lyrics on the record, man." And he's like "What do you mean?" and I said "You didn't listen to the lyrics?" and he's like "No," and I was like, "We're with the wrong guy."

Since you've been a band, there have been all sorts of fashion trends and music trends; there's all this weird music out there that wasn't 10 years ago. Through it all, you've stuck to your own look and sound and I was just wondering if you've done that on purpose, or if it just came naturally, and if you've ever gotten pressure from other people, like You have a new label now, to change who you are?
I really appreciate that. You definitely see the trends come and go in the last 10 years, with however many amount of bands and artists that have kind of come and gone. And then out of the whole group that comes, one or two of them will stick around. And you see that it's harder to get played on the radio, it's harder to sell things, it's harder to do anything. The one thing that we've always believed in [is] that at the end of the day, the music industry can be kind of shitty sometimes, and it's definitely not always set up for the artist's favor, but there's a reason we got into it. There's a reason you write, why you're a music journalist, right? Because you love music. We love music. We've just never let anyone take that from us. So we're always, constantly fans. That's the one thing that we always believe in, that at the end of the day I can go home with my acoustic guitar and sit on my porch, and that's all I really need.

We started our band when we were 16, got signed when we were 20, so we had a chance to play around Maryland, in Annapolis, Baltimore, and DC. But then we make our first record when we're 20, 21, and all of a sudden we're out in front of the world. I didn't know we were going to put out a record and everyone was gonna say, "Oh, they're punk. Oh, they're not. Oh, well they're this. Oh, well they're that. Oh, these guys won't make it past one record." And it's like, "Woah, what did we do wrong?" We just wanted to make a record that we liked. So there was definitely a little period where you get a little jaded and you're like, "Man, fuck you guys. What did we do to you guys? We weren't trying to do anything other than have fun and play music together." And then you get a little older and you're like, "Ok, well no one meant any harm by it, that's just the way the world works. But I don't want to be one of those people." And through the years, that's been our attitude. Let people say what they will, we'll take the good, we'll leave the bad, and every record, we just gotta be ourselves. Even if people say, "Well, why did you do a song that sounds like this?" and we say, "Well, because we were in the studio having fun and we really liked it." So at the end of the day, every Good Charlotte record is going to sound a little different than the last one, there are going to be new elements, even if people don't get it.

Like, Good Morning Revival, a lot of people just didn't get that record when it first came out. And I feel like a lot of people are starting to come out and say, "I get that record a little bit more now. I get what they were doing." And that's really rewarding for us, because we love that record, and we love The Chronicles of Life and Death too. With Chronicles, we tried a bunch of different shit too. So as long as we stay positive and we keep trying things on records that we want to try and that we believe in, fans will hear [that] on the record. At the end of the day, I think that's all that really matters with our hardcore Good Charlotte fans that have stuck with us through the years. All they wanna know is that we haven't changed. Because our lyrics, we're not fronting. We mean our lyrics. All of our stories are true. Those are the bands I gravitated to when I was younger. You can't make up a story in a song and make it sound true. It's like an inner instinct that people have. So I think that's what's kept a lot of our fans with us.

You know, sometimes the guys will get down and be upset. [People] don't know what we've been through. It gets frustrating when you see some cool, underground punk group out on tour, and they're really all just a bunch of rich kids whose parents bought them a band. You're kind of like, "Damn, man. Just because we sing poppy songs, we're not credible, and those guys whose mom and dad paid for the whole tour [are]?" I would always tell the guys, "Listen. Don't take it to heart. Those kids don't mean any harm. It's just the way the world is." For us, our credibility is gonna be in our catalog.

5 records later, I gotta tell you, the world is a much nicer place for Good Charlotte. It doesn't matter if it's metal fans, punk fans, fucking grindcore fans, hip hop fans, everywhere we go, people are just like, "Oh yeah! Good Charlotte." We kind of fought out through some of the harder times. We all love each other. We're all best friends. We're all uncles and godparents to each other's kids. Now we get a lot of love from every scene.

This record, Cardiology, has the most well-received vibe of any record that we've ever put out. We're just getting so many great comments from our fans, the tours that we already have set up are crazy the way that they're selling already. We definitely don't take it for granted.