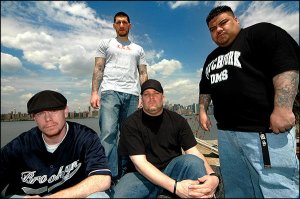 Madball. So very few bands are able to conjure up such a loyal fan-base alongside such ire from outsiders. One of the first NYHC bands, Madball seems to be able to communicate on an incredibly direct level with their fans, but outside the scene, their detractors sometimes seem to be legion. Certainly, the group has paid its road dues, with lead singer Freddy Cricien touring behind his band or Agnostic Front since the tender age of 14. And certainly, it's not due to their exposure. Other punk influenced have become much more popular internationally than Madball, but have not had the torch of criticism applied so directly.

As both a defiant declaration and a call of comrade, Madball has just released Empire, an album that lays claim to New York while thanking its supporters in one half hour swoop. Empire acts almost as a manifesto, focusing the bands previous statements as well as acknowledging that they get a lot of guff from both inside the punk circle and out. In order to get the insider perspective, Punknews interviewer John Gentile got out his nicest basketball jersey and mesh shorts, and then sat down with Freddy to get his explanation of Madball's significance, a little bit of history, and what he thinks of the intense loyalty of Madball's fans compared to their vitriolic critics…

In promos for your new album, Empire, it says that you are taking control of things that previously were not in your control. Can you elaborate on this?

When we first started out, and this is partly our fault, we didn't know a bunch of stuff about the business aspect. We were just seeing where the band went. It was more for fun and passion, so we signed some crappy deals and let some people steer us this way or that way. Now, weâre no longer in that position. Now, I dictate the terms. We dictate how much touring we want to do. We don't feel the pressure to tour. Nobody ever put a gun to out head, and now we feel like we do our thing. We're active and stay busy and control a lot more things in our life and were probably bigger now than ever.

Why do you think that you are bigger now than before?

I think it's just because hardcore got bigger. Even before the internet, people were going to Europe and bringing back word of the scene over there. It has just grown, and it continues to grow. Being that we're in the forefront, we stuck it out, and we've grown with the scene.

Empire seems to be a very tight, purposeful album. Did you have a particular goal or message in mind when recording these tracks?

Weâve definitely evolved, but with this release, we wanted to bring it back to the essence and make an in your face, pissed off record. We do represent ourselves and this genre that we are a part of and people are starting to forget that it's aggressive, in your face music. We just kind of did it a little more pissed off, just to bring it back a little. I did do some singing on it that you wouldn't expect to hear in order to give more melody to the backing tracks. But, it gets blended and might not be noticeable.

Eric Rutan, who is known as a metal producer, produced Empire. How did that affect the writing process?

Eric is really really known for the death metal stuff. Heâs definitely more of a metal guy than our previous producers. He's a big fan of Madball. I like his tones and the sounds he's got.

It definitely wasn't because we wanted to go in a more metallic direction. This record is more of a throwback. Also, he wanted to show people he could work outside of metal. I had met him on tour with Hatebreed, and we knew each other. Once we had a conversation, he really sold me on the fact about what he wanted to do and how it fit Madball's sound.

Why did you select the name Empire for the new record?
Well you know, that's kind of a term of empowerment for us. We feel weâre in a good spot right now. Being one of the representatives of our genre, people always refer to us as "kings of hardcore." We're not douche bags that walk around going, "Oh, we're the kings of hardcore!" But, the term was placed on us. We didn't come up with it. It's a term of endearment, so we took that and ran with it.

We've come along way from begin street kids and getting into all kinds of stuff. We feel like weâve kind of built an empire with Madball and things related to Madball. A lot of good things came from Madball. It's also a nod to New York. Our family and friends and city are all part of that empire.

In the song "Glory Years," You state that thereâs, "no glory in living in the past" and even "forget the past." Shouldnât we remember the past so we can learn from out mistakes?

Everyone should remember the past. We learn from our experiences. This song was kind of about the idea of hardcore. Sometimes people just talk about the "glory years." "In my day we did this or that." Those conversations get boring. It's cool to reminisce a little bit, but you have to keep it moving. You can't live in that time and place forever. You have to continue to do something now!

You started touring at the age of 13, with your older brother Roger Miret with Agnostic Front. Does this give you a unique perspective on punk and hardcore?

You know, if you go back to the beginning and our first album Ball of Destruciton, that was me singing over old Agnostic Front songs. When I got older and we started to do it again, we decided to do it right, and possibly considering touring with it. I think that's where the uniqueness of it just came out. Roger is my oldest brother, but I'm my own man. From this lifestyle to the business aspect, I'm my own person and entity so I'm gonna approach things differently. When Matt Henderson got involved, he kind of took a different approach, and Madball morphed from me doing old school AF songs and it just grew into its own thing. We weren't, "we have to be different"! It just was different.

NYHC is often called, "tough guy" hardcore. What do you think of that term?

I think there's too many little labels. New York was one of the first hardcore scenes. It used to be referred to as just, "hardcore punk." I feel that New York stripped it and said, "this is hardcore." I think that gave it even more of an identity, and I think that's a good thing. I think that movie American Hardcore is over generalizing and is not a good representation of an entire scene.

What do you think of the term "bro core?"

It's like I said before. Our music has always been hardcore. That's nothing against punk rock. We can't not acknowledge the fact that what we created came form a punk background. The earlier guys that help create the scene- Iâm not going to deny the connection.