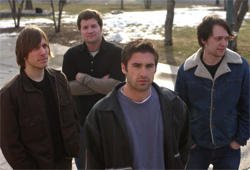 Via an Anonymous Source, Posted by Ben Conoley Thick 10 years ago

Horace Pinker entered Sonic Iguana Studios to record their next record with Mass Giorgini. This will be the fifth release they have recorded with Giorgini (Pop Culture Failure, Copper Regret, Red-Eyed Regular, Texas One Ten) at Sonic Iguana. The band will be posting updates to their website to document the recording and have already posted one update, stating,

"Day one is over. Tracked the drums for 9 out of 10 songs and it only took 12 hours! Day two will finish 1.5 songs on the drums (one song needs some more work but is already tracked) then on to bass tracks. Hopefully we can start guitar tracks tonight after dinner break and actually stay on schedule. If we can get to vocals Sunday we might actually finish this sucker in five days!"

Videos: The Lawrence Arms: "Them Angels Been Talkin'"