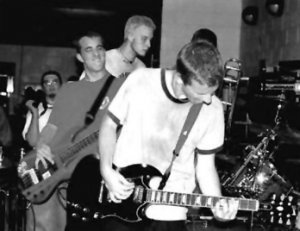 Asian Man Records has thrilled fans with the announcement that Slapstick, the beloved Chicago ska-punk act who've been defunct since 1996, will reunite for the label's upcoming 15th Anniversary show. Slapstick was notable for featuring a young Brendan Kelley and Dan Andriano, later of The Lawrence Arms and Alkaline Trio respectively. The Slapstick family tree goes on to include bands such as The Broadways, Tuesday, Less Than Jake, The Honor System, Duvall, The Falcon, Colossal among others. All of Slapstick's original members are reuniting for this show.

The Asian Man Anniversary Party will take place in San Francisco, CA next June. It will feature acts like the Lawrence Arms, Sundowner, The Queers, MU330, Bomb the Music Industry!, The Sainte Catherines, Andrew Jackson Jihad and a slew of others.