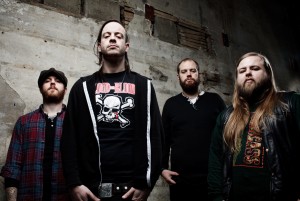 Three full lengths in, the Cancer Bats are giving in their all; going stronger and heavier than ever. Much like their previous two LPs, Bears, Mayors, Scraps & Bones hits like a punch to the face. But one thing's quite evident this time around - with their heaviest work to date, those punches are more powerful than ever. Prior to heading out on the road with Devildriver, drummer Mike Peters spoke with Punknews' interviewer Mark Millard about the writing process behind their recent record, touring with heavy hitters the Dillinger Escape Plan, and the possibility of a new record in the not so distant future.

2010 seemed like a really good year for the Bats; the record cracked several âbest ofâ lists and you guys were on the road as part of some pretty cool tours. Whatâs the general vibe with the Cancer Bats here early on in 2011?
Itâs really good. Weâve had a month off now for Christmas and I think weâre all really itching to get back on the road and start playing again. But the overall vibe right now is just to start thinking about making a new record actually.

What can you tell us about that?
We havenât stated yet, itâs just been talked of, man. But the plan is by the summer time to have actually started writing or thinking about that sort of thing at least. Itâs in the back of our mind right now though.

Looking back, you guys were a part of some pretty extensive tours with really strong lineups last year; even supporting a few really renowned bands. Were there any shows, or simply tours, that really stuck out to you as a proud moment for the band?
Definitely Download Festival. I think it was in June and we were playing in England and I think that was the best show weâve ever played in our lives. It was crazy. We couldnât believe how many people came to see us. And we also played our biggest headlining show in London. That was really cool too.

Playing bigger shows like the ones in England, where do you think the bandâs at live now as opposed to a few years ago when supporting Birthing the Giant?
Iâd say leaps and bounds ahead of where we were. I mean having someone like Jaye in the bandâ¦ Heâs an incredibly complicated and just overall really good bass player. So having that in the band, weâre just way more of a unit. We can get up there and just really play at any time, whenever we want.

Being a part of really strong tours and supporting bands like the Dillinger Escape Plan; can you still learn from bands like that?
Oh yeah dude, big time. Touring with a band like Dillinger is just so inspiring, and I think itâs really beneficial. Itâs not only for their technical proficiency, which I think a band like thatâs known for, but things like; almost every day I would get a little drum lesson from Billy. He just wanted to teach and loves to practice on his drums, so every day it was just like pushing me to learn more and do more as a drummer and watching a band like that liveâ¦ I mean I saw them tour when I was in high school for Calculating Infinity. Then to get to tour with a band like that, and when weâre all kind of the same ageâ¦ Just to see a band doing things themselves, being really "punk" about everything, and doing well, itâs just inspiring to see that sort of attitude in music.

And now youâre taking your music out on the road with Devildriver. What do you guys expect and ultimately, what can your fans expect?
Iâm really excited for it because I donât know what to expect. We havenât done too many really metal tours I guess. Weâve done a lot of tours with bands like Billy Talent, Alexisonfire and Bring Me The Horizon, but weâve never really done tours with long hair kind of metal bands, you know? But Iâm really excited because I think their fans will kind of dig us and our fans will be into Devildriver. So I think it should just be a raging night of messy partying and serious fucking fun. Circle pits and long hair whipping around, I hope anyway. Even though I donât have long hair, that one was taken away from me.

Well at least you still have the beard going, right?
Yeah man, I need to compensate somewhere. (Laughter)

Exactly. So letâs talk about the new record. The songs sound like they were written to really translate with ease in a live setting, perhaps even more so than youâve done in the past. Is that accurate?
It was definitely recorded to go into a live setting. We wanted to record the record and make it sound like we go live because weâve always had these records that sounded a little more clean and polished, and then weâd go and play live and it would be way heavier, way dirtier, faster and angrier. It was like, "Wow, this isnât the band I listened to on CD." So we just wanted to make it a little more accurate to our live sound because we are more of a live band then a recorded band. Weâd way rather be on tour for like three years than have to go into the studio and record.

And just to build off of that a little moreâ¦ Obviously you guys have always been this heavy in-your-face band, but I think this could be some of the heaviest music the Cancer Bats have ever written. Can you think back to the writing process for the record and tell us: what was the ultimate goal heading into it?
I think the goal was we wanted to keep putting out heavy records. Some people thought when we put out our first record and toured with a band like Rise Against that we were gonna go with more of a cocky, mainstream angle. Getting heavier as the band progresses is almost like saying, "Fuck you, weâre gonna do what we want." We want to play heavy music, we know how to play heavy music and we know how to play it well. So we were just going to make a heavy record - that was always in our minds, you know? But we also wanted to do different things and thatâs why we have songs like "Raised Right", it has more of a melodic side, but itâs still going to be heavy.

And personally as a drummer, what did you want to bring to the table this time around?
I wanted to bring a bigger sound, you know? I really wanted just an overall bigger drum sound. Weâre such a guitar driven band so I wanted to get behind there and really make them stand out and keep it really loose and groovy; play the right thing for the right part but not try and outshine anyone too much at the same time.

Do you have a favourite [ed.: due to the Canadian nature of this interview, Iâll allow it] track on the record?
Heading into record the album it was definitely "Scared to Death", but coming out of recording the record thereâs definitely been a few favourites. I love the track "Raised Right", I love "Fake Gold", that song rules. And "Scared to Death", I still love playing it. I think because itâs different than a lot of stuff weâve done and played before.

Now here early in 2011, and as aforementioned, you guys are starting to think about the band's fourth recordâ¦ That said; whatâs the biggest thing youâve learned as a band over the years?
Itâs just to work hard and do what you want to do, and not let what other people say get you down. Youâre just going to burn yourself out, or try and make the record that youâre not comfortable making. You have people come up to you trying to tell you to do certain things and itâs like, "Weâre not gonna do that." And theyâre like, "Well if you do that youâre going to get played on the radio." Well, maybe we donât care about being on the radio, you know? Maybe if we do that, all our fans that already do like us are going to stop listening to us. So just do what you want, have fun and just work hard.

And thatâs really refreshing to hear man, because thatâs what itâs all about right?
Yeah man, exactly. I just think if you really want to do it and you work hard and youâre smart about things, thereâs a lot you can do.

Definitely. And being a new year, outside of working on and potentially releasing a new record, is there anything you really want to accomplish this year?
Iâd love to do some touring in parts of the world that bands donât tour so often. Like Iâd really love to go see some places like India and China or Indonesia. Iâd like to go to Mexico, and even play Russia. Weâd just like to do some stuff like that, which might not happen this year, but who knows? Weâll see.