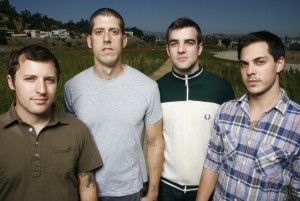 "You have reached Dan Yemin. I am not able to answer my phone right now. If I don't call back in 10 minutes, then my cell phone is out of service range. If there is a life threatening emergency, call 9-1-1 or proceed immediately to an emergency ward."

So goes the cell message of Dan Yemin, a Philadelphia child psychologist who just happens to be the vocalist for one of Philadelphia's most explosive hardcore punk bands, Paint It Black. Oh, also, he was kind of an instrumental force in two groundbreaking acts, which harkened back to punk's glory days while pushing the medium forward- Lifetime and Kid Dynamite.

Paint It Black was formed after Yemin had a stroke following the end of Kid Dynamite. But, while some people would take things easy after such an ordeal, Yemin increased the elbow grease and formed PiB, a band which growls like prime Black Flag but discourses like Albert Camus. Soon after their first release, PiB gained a name for itself through fierce live performances chocked full of short, nasty songs worth unusual structures that were firmly rooted in hardcore. Now, some 8 years since the first release, PiB continues to tour sporadically as well as having recently two well received EP. But, while media likes to paint these punk rock guys as uneducated, covered in pins, and living in gutters, Yemin bucks this stereotype with a snap of his fingers- the man holds a doctorate in psychology from Widner University and runs a successful practice in the suburbs of Philly. More recently, Yemin became a new father which has added another ball to his juggling act and leaving us fans with the question, "what's gonna give?"

To answer the question, Punknews interviewer John Gentile turned the tables on Yemin- After leaning back in an upholstered chair with a cigar in one hand and a note pad in another, John copped an Austrian accent and began to pick Yemin's brain on his thoughts about punk, fatherhood, professionalism and the balance of all three.

Paint It Black put out three albums and then followed this by realizing two EPs. Usually, bands release EPs before albums. Is the EP format, as opposed to an album, a way to keep things fresh for the band or is it a way of paying tribute to your hardcore forefathers?

It's both. It is a way to keep things fresh for us. The worst thing that can happen to a band is to not be interesting anymore. Also, it is a tribute to some of the most important records of all time that were 7" EPs. It's also about being in touch. When working on an album, when you feel you have an albums worth of really important things to say, it takes a certain narcissism to go down that road. So in some ways, it's a way to be humble in the face of our or forefathers.

How are you pushing your own boundaries?

I think at first, switching to the seven inch format was a way to challenge the boundaries. Hardcore and punk are split into several camps. There are the super DIY folks who will put out seven inches all over the pace and there is the more professional approach- collaboration, promotion and touring schedule. When we do the more professional thing, I think we loose a lot there, and the seven inch thing was in some way a chance to break the cycle and throw it in the trash.

The whole idea of album of promotional cycles is more and more cycles. When you participate in that to some extent, I start to wonder what separates us from the Warped tour bands- so in that, seven inches are a way to disregard the trappings of the professional music world. The seven inch is a deliberate way to disregard the trappings of the music world that the underground has become tainted with. Specifically, focusing on major label style promotion of records, and the stuff that has really made me sick.

The real challenge is continuing to make music as your life changes radically. We continue to put out records to go along with the change of circumstances. I became a dad and it kind of blows my mind how much energy that takes. Continuing to write and record shows is the new challenge.

It seems to me that the lyrics of the song "Sacred" are in part about being less selfish. is this a reaction to your fatherhood?

Like everything, the lyrics are multi-determined. They come from a lot of different places. I don't sit down and say I'm going to write about this or that. It's more about convergent meanings. I just start writing and see where it takes me. I realize that it's about a lot of different things that are going on. It's also about old circumstances that keep cropping up. That songs is about a lot of shitâ¦ I mean, right nowâ¦I have the phone in hand, the baby monitor in another, and I'm dropping stuff all overâ¦

So yeah, it is about selfishness. It's also a very direct way of talking about fatherhoodâ¦about how your priorities just radically shift when your partner is pregnant. It's about taking care of that kind of stuff. Overnight your priorities just change about who the most important person is in you life. You've got this helpless little creature that is all of a sudden the center of your world. I'm not the person that can really process circumstances too well until I'm in the middle of things in a tour. I'll be excited when we are on a plane or on the road, but before that happens, it's more abstract, only when the baby came did I realize what was happening to my life.

The other side of parenthood is where you think a lot about responsibility and you take care of yourself because you need to be around to take care of these other people. That issue pops up a lot of times- being aware of how dangerous the world is- about how easy it is to hurt yourself.

I've already had some friends die of cancer. They were people that were parents. Just thinking about what it is to keep yourself safe. Your child is your priority, but your own health is also your new priorityâ¦ riding bikesâ¦ stage divingâ¦ people get broken necks… These are generally harmless things that all young peopled. But, I'm not a young person any more… just think how close to death we are all the time.

In some ways, that returns to the theme of the first record. I had a stroke about nine or ten years ago, and a good hunk of the second album, that part about new bruises and new pills is about coming back from tour and finding scars and bruises that I didn't have when I left.

You swear off nostalgia in "Surrender." Is nostalgia bringing down the punk scene?

No. In that line, I'm talking about nostalgia in a very specific way. The line is line, "No more nostalgia." It's about getting older. The face that I wore is both literal and a metaphor. We live in a culture that is obsessed with youth, as much as I like to think of myself and the music as kids, we're not. The song is about staying in the present and not looking as our music as the same way we did then 15 years ago.

The rest of that verse is a reminder of our personal politics. People refer to the 90s as the "PC era" of hardcore. I don't think there's anything PC about being respectful and refraining from repressing minorities. There's been this backlash in politics in hardcoreâ¦ I've been trying to not call people out on what they say. I don't want to feel like a principal, but in an effort not to be so wrapped up in that, I've let myself slip. "No more violence with my eyes" is about renewing my vows. If I'm a punk and a politically progressive person, I need to watch my own behavior and watch what comes out of my mouth.

You have previously commented on how many people in the punk rock scene seem to use words that have been used as tools as repression in the past. Following this, you have contrasted the "punk vocabulary" to how people in academia tend to speak more eloquently. Could you describe your stance on diction in the punk scene?

Maybe it's just my axe to grind, using words that are degrading to people who are part of a sexual minority. But, using those words is ignorant. If you want to pretend that it is okay to use that word- it's not okay. It does hurt people and devalue people. If making music gives me a voice, then I want to use it. So say something more worthwhile.

You are a psychologist for mostly younger people. How has this informed your life in punk?

75% of my clients are teenagers. Hopefully, this helps me understand being teenager. You can read 5 books but if you're not involved in the adolescent experience then you don't know shit about it. Being in a band keeps me playful in a lot of ways, which is important in my work.

Has your punk life affected you in your profession? What do clients do when they find that you are in a hardcore punk band?

People find out. It comes up a lot through internet searches. A lot of people Google everything that their kid comes into contact. If you Google me you're not going to find a lot about psychology. It takes people by surprise.

Has it hurt me? I definitely think that there are people who find out about that and don't come to see me. I wouldn't want that person as a client if they find my involvement in Paint it Black to be threatening. I'm not interested in proving that I'm credible because I'm in a band.

You're a new father, which surely takes up a great deal of time. So, what's in the future for Paint It Black?

Things are gonna happen a lot more slowly. I think the hardest thing is going to do anything. Jared, our drummer, wanted moved to California, and I said, "What's stopping you?" I think it was his loyalty to the band. But, I let him know that we were going to move slower so he should go. We can figure it out. We've always dealt with those kind of contrasts the whole time we've been a band. We've never been totally free with our time and location to do things.

90% of my time is now committed to my family and work. Two out of the four of us are self employedâ¦ now a great deal of my flexible time from that is going to go to taking care of our daughter. So, it's gonna go slow. I would like to get another seven inch out in the first half of next year. I think the first half is written, but the band has only heard two songs.

Thanks to Punknews in general for always being there and always being supportive of the band. I feel really grateful to the site and the people there and the kids that are regulars. We've been included on the best of lists consistently for the past five years and I don't take that compliment lightly.

The older I get, the more seriously I take that it's a real privilege to have Punknews and its editors and readers take us seriously and care about what were doingâ¦ wowâ¦I'm getting a little choked up.