Via an Anonymous Source, Posted by Aubin Paul Adeline 11 years ago

The Frustrators have revealed more details about their upcoming EP. The band which includes Green Day bassist Mike Dirnt and are releasing their first new material since 2002's Achtung Jackass. The new EP is titled Griller and is due out February 15, 2011 via Adeline / Dr.Strange. The label had this to say about the EP:

Griller won't alienate the group's core fans. Its quartet of tidy gems clock in at around a dozen minutes, and bring to mind Bay Area peers like American Steel and scratchy '90s melody makers Jawbreaker (whom Linehan also cites as a personal influence). The EP's furthest sonic experimentation might be the languid, reverb-y surf licks on "West of Texas (Part 2)," a sequel of sorts to Achtung Jackass' "Part 1" that wouldn't sound out of place on a Hoodoo Gurus record. 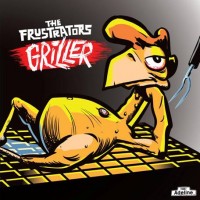