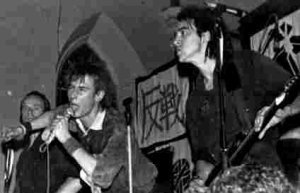 If The Sex Pistols and The Clash were the first political punk rock action in Callaghan/Thatcher England, then Crass were the first opposite reaction. While Lydon and Strummer questioned English norms, Crass put punk and public policy to task, digging into both with equal fervor in order to see what really was under the veil.

Initially directed by Steve Ignorant and Penny Rimbaud, Crass immediately made a name for themselves by being one of the first punk bands to play benefit shows, press their own records, and make the integration between album art, music, and politics apparent. Before breaking up in 1984, Crass, despite never being on any label except their own, made national news multiple times for such actions as distributing faked tapes of confidential prime minister communications, slipping their own records into teen romance magazines, and for saying that Jesus, "hangs in glib delight upon his cross." Whew!

Now Steve Ignorant is doing a final tour of Crass songs. So, Punknews interviewer John Gentile sheepishly turned his Van Halen T-shirt inside out and sat down with Steve Ignorant to learn about the purpose of the current tour, Crass' history, and to poke punk with a stick just once more to make sure that it's still dead…

Why tour behind Crass songs now?

We previously did two shows in London. That was meant to be a one- off thing, and the idea for that was to be a unique one-off. Afterwards, I started to get lots of phone calls from places like Los Angeles, and it took me two years to decide whether or not that it was right for me to do these songs. Having done so much correspondence with people who wanted to see it one last time, I thought to myself, "Why not? One last time celebrate, to see it performed live."

I have to stress, this tour is called the "Last Supper." After this tour, I will never ever perform Crass songs again.

Why has Crass had such staying power?

I think maybe it's the things Crass were talking about. We were talking about things that a lot of people related to. I think that something strange has happened with the circumstances of Crass, and those songs are timeless. It's quite obvious that we always tried to be more than just a band. We always tried to be more of an information unit, so we were introducing young people to issues. But now, I don't think those songs could be written today. The world is different.

Crass is often spoken in mythological terms, as this near divine, infallible band, if you will. Do you find it burdensome to have this image applied to you some 25 years later?

Yeah, I think your right, and I think that's the reason I wanted to do this tour. Penny once had this thing about Elvis Presley, about how the icon of what Elvis seemed to be wasn't really what he was. So, for Penny, it was like the same with Crass.

I've talked to a friend the other night about this. So many people are saying that Crass was this or that and when I started on this project, there was a great outcry from some people about the "myth of Crass." Crass were not meant to be gods. I think it's very easy for people to build something like Crass into some unrealistic thing that can't do any wrong and not see what Crass really was- a group of people, each with their own respective faults.

Along those lines, you got a little flack a few years ago for doing the album The Feeding of the 5000 live. People said it would destroy the Crass image. Do you think that it did?

I think that everyone has their own cute little ideas of what Crass was, and I wanted to destroy that. What those people don't realize is the reaction of the people at those Feeding of the 5000 shows. The people at the shows were in their 30 and 40s and some were kids with the same ideas and inspirations. The shows gave me a chance to talk to them. Some people want to keep Crass as this dressed in black, iconic thing. I'm not into that.

You previously stated that, "Crass didnât stop, it just faded." Can you explain that?

I think that reallyâ¦I don't like indulgenceâ¦ But I think Crass inspired a lot of people. I still believe in what we said. The band confronted certain issues, and a lot of people had issues with the band. We put out records cheaply, and did shows cheaply, and I just think the nature of the band is what caused the band to stop.

Crass was famous for its veto policy, where the entire band wouldnât do something if one person voted against it. In 2011, whatâs your opinion of that symbolâs effectiveness?

For us, it worked very well. The members always had to have respect for people in the band. Crass was always unique because we were seen as Crass and not as individuals. We didn't compromise. If someone didn't want to do something, you had to respect that.

I've never quite understood the meaning behind your classic song, "Do they owe us a living?" Can you explain it to me?

That line actually comes from a poem that a good friend of mine wrote. The poem is actually, "Do they owe a chicken whose neck they wring for Christmas a living? Of course they do!"

The song is about is when I was 18 years old. I did mean "a living." Not money, but that they owed us a quality of life. The way that people still live in poverty and wars, and all the young men in warâ¦ I think that's what it is about.

The Crass logo has been worn by everyone from millionaire David Beckham to train hopping punk rockers. What do you think of so many different people appropriating the symbol?

It's quite simple. People know that if they get a t-shirt with Crass on it in stock, theyâll sell quite a few. A lot of people came up with symbols, but I don't think any of them have had the same impact as that one. Itâs very mysteriousâ¦ but I don't really know why it has been so effective.

Crass took shots at the Clash throughout their career in their lyrics. Did you guys really hate the Clash, or were you attacking them as symbols?

I think that the Clash were a great band. I would love to have had a chat with Joe Strummer, but I'm sorry that it didn't happenâ¦

We would love to attack why they would say "Stay in London" and then went off to America. They became more of a rock and roll band, and I've found that the song they did with Allen Ginsberg was hard to relate to as an English person. I think that's what we were attacking.

Iâve always wondered about the Penis Envy album, where the band asked you not to do any vocals and had female vocalists sing instead of you. Did you take it personally when they didnât let you sing?

First of all, I was like, "I started this band!" But then, I was like, "That's a really good idea," because women weren't accepted in punk. Also, because we were dressed in black with blokes growling, it was a really good twist to confront people, to be confronted by the feminist view, and it was a sort of way of seeing if they could go for it. The nice thing is that it did speak to a lot of women. There weren't many in punk, but I think, for this tour, a lot of women have come up and said what the album meant to them.

Lastly, if Punk is Dead, was the cause of death suicide or murder?

I think it was definitely murder.

I'm really looking forward to coming to the USA. I would like to stress that this is not Crass. I really want to make it straight that Crass has not reformed. This is Steve Ignorant and some friends doing Crass songs for the last time.