Restorations will be releasing their debut full-length via Tiny Engines. The album is self-titled and drops April 19, 2011, with a digital release preceding it on March 22. Once out, it'll follow up the group's 2010 EP Strange Behavior, released via Paper and Plastick. Click below for the cover art and track listing.

Alternative Press is streaming a track from the LP entitled "When You're Older"; that can be heard here. 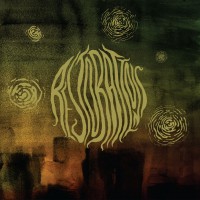 Travis Barker: "Saturday Night" (With Slash and The Transplants)