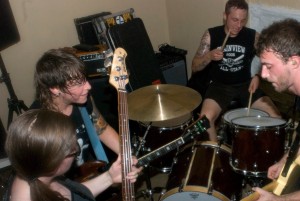 by Justin August No Idea 12 years ago

Bridge and Tunnel dropped us a line to let us know their plans for their highly anticipated sophomore long-player. The band is set to record with J Robbins (Against Me!, Lemuria, Burning Airlines, Jawbox) in April for a release via No Idea - probably in the summer or fall. The band will be joined by their new bass player, Al from Nakatomi Plaza.

The LP is the follow-up to last year's Indoor Voices 10" EP. Band members have been busy as of late with the recent demise of singer Jeff Cunningham's Thousandaires and Pat Schramm's involvement in bands like Stolen Parts and Daytrader while Rachel Rubino resurrected her instrumental post-rock outfit Each Other's Mothers. Of course, you'll be able to see them at this year's FEST in Flo-rida.

Music: The New Recruits: "What Have We Got To Lose"