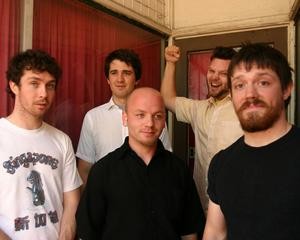 Big Scary Monsters will be giving the vinyl treatment to Bear vs. Shark's first full-length, Right Now, You're in the Best of Hands. And If Something Isn't Quite Right, Your Doctor Will Know in a Hurry, for the continent of Europe.

The red/black-colored release will include two previously unreleased bonus tracks ("June 7th" and "California") and be limited to 250 hand-numbered copies. It will be packaged in a cardboard sleeve showing a number of the drawings taken from the original CD release. It's due out May 9. A mini-site has been set up with several live videos and links.

The album was originally released in 2003 on Equal Vision, with Bear vs. Shark breaking up in December 2005 and vocalist Marc Paffi and original drummer Brandon Moss eventually moving on to Bars of Gold.

Videos: Wild Orchid Children: "Ahead of Us the Secret"