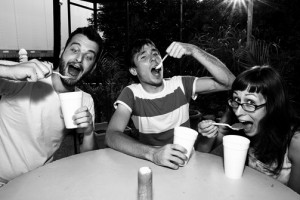 Lemuria is a band of fluctuating size and shape. Considered to be primarily a trio, they recently wrote and promoted their newest release, Pebble, as a duo (featuring just Alex Kerns and Sheena Ozzella). Shrinking their numbers further, Ozzella rarely handles interview duties, allowing Kerns to speak for the group. Dashing aside convention and stepping to the forefront, Ozzella sat down with Punknews interviewer Kenneth Flenniken to talk about the band, the new album and even baking.

How's the tour going?
This tour has exceeded our expectations. We're getting to play a lot of new places. Fort Meyers was incredible. This tour has been almost perfect.

What stop has been your favorite so far?
St. Louis, MI, definitely. Playing at Off-Broadway was incredible. Everything sounded good on stage and we played really well. We also got to spend the day with some friends we'd usually only see for a few hours.

What is your favorite song to perform live?
I really like playing "Gravity" off of the new record. Of our older songs I'd say "Lipstick" or "Dogs."

What song are you most proud of?
I guess I would say everything on Get Better. I write more when I'm sad. Get Better was about long distance relationships and how hard they can be. The songs were all about that but I just found different ways to say it. But I'm a lot happier now. Alex wrote ten out of the eleven songs on the new record. Alex just said his is "Wise People."

If Lemuria (or music in general) hadn't panned out, what did you see yourself doing?
Lemuria is something I do for fun and I feel lucky that I get to do it. I'm going to school for baking and pastry arts at Niagara County Community College.

What artists influenced you most growing up?
90's alt radio stuff. I got into the punk stuff late. My favorites were Rancid, AFI and The Ataris. I'm not sure I would like them as much now if I didn't like them so much back then. Getting to tour with Kind of Like Spitting was incredible. I feel like I missed a lot of the "classic" or "important" punk bands until recently. I didn't start listening to The Descendents until last year. Same with Screeching Weasel. I heard Jets to Brazil before Jawbreaker and used to like Jets a lot better until I heard more of Jawbreaker's material. I was into ALL before The Descendents and I love Chad Price's voice. I like them more than The Descendents and people think I'm crazy for that.

How did you choose The Pixies "Alec Eiffel" as your choice for the Under The Influence series?
It was tough. It took hours and hours. It's tough to choose a band that not only influenced us but the band overall. Two of us would agree on something but the third wouldn't. ALL's "Million Bucks" was another choice. Alex wanted to do a They Might Be Giants song but I don't know them all that well so it wasn't a good choice.

Is there any specific artist(s) that influenced you on Get Better? Pebble?
For Pebble I'd say Fleetwood Mac. We all are obsessed with Fleetwood Mac. They use weird drum beats and production. Fun stuff to try. Hopefully trying those sorts of things can help us grow as a band. The Police and old classic stuff is where we got ideas for both records. They are timeless and inspire us. They stand the test of time and won't just fade away. Also, The Pixies. They are weird and interesting but they have charm and their sound works because of it.

Are you familiar with Mitch Clem and his comics Nothing Nice to Say and My Stupid Life?
Yeah. I didn't know him before I was told about our mention in them. Max was in Send Help! with Mitch so he's a friend now.

Are you aware of Clem mentioning you in his comics? How do you feel about that?
It's cool that I made it into a comic. I think I had pigtails in it which is pretty bad ass.

Was it a deliberate decision to leave Max off of the cover of Pebble? How does Max feel about that?
It was kind of a weird time. We shot pictures after recording the album and we didn't have a bassist because of the Canadian Government so it was just how it was at the time and we had to get the album artwork turned in. Plus we were the two that wrote the album and it was a safe choice because of bass player switches and uncertain futures. We knew Max was going to be doing an upcoming tour with us but didn't know if that would continue.

What artist or band would you like to tour with? Any band, even The Beatles.
Drag The River, Guided by Voices, Leatherface, Paramore, Built To Spill.

Thanks to the internet, female musicians often face the stigma of hundreds of anonymous message board posters commenting on whether or not the musician is hot or not. Do you feel that kind of stigma is carried over while you are on tour or does it not seem to matter that you're female?
I just gotta stop looking at message boards. They mostly make you sad or angry. I'm treated perfectly by my bandmates and great by our fans, in regards to being a female and playing music. I think women should be viewed upon as musicians more than gender should have anything to do with it. If someone says something fucked up then I let them know how I feel. I still sleep on the floor. I still poop.

What are your hobbies outside of writing music?
Sudoku lately. I love to bake. I pretend I'm crafty but I'm not. I'm trying to get better at knitting and stuff. I want to be a grandma already. I want to drink tea and hang out in my rocking chair and hang out with cats all day.

What is your favorite thing to bake?
Bundt cakes! They are delicious. Coconut lemon bundt cake. Cookies and brownies. All the old fashioned classics. And pies! Pies make everyone happy!

If you could have any sort of superpowers, what would they be?
To not have to sleep ever. Does that count? I'm always tired all the time and not able to do exciting things.