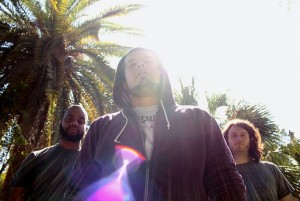 Capsule recently hit the road in support of their newest album, No Ghost. While on the road, the band documented some of their adventures and we present the second set of stories in tonight's Dispatches.

After a week of shows as a trio, we picked up Alex (drums) in Phoenix, AZ and capsule is intact! After a debriefing over at Baja Fresh, we went over to the Fixx coffee shop for some iced latte's and coincidentally, play a show; The show was short with only three bands and bands were getting free iced coffee, hence by the time capsule was up I was two Iced Americanos's deep and ready to shred into next week. Despite Alex's slight jetlag, our first show back as a four piece was like beer and cereal; we just belong together. After the show, our boy Marc took us over to a friends house to have a beer (sans cereal) and crash. However, as soon as we arrived the cat dander hit some of the capsule crew like a wave ofâ¦.likeâ¦ really brutal cat dander. We had a beer and a smoke and said our ' we really appreciate it but we can't breathe,' good-bye's and crashed at Eric's (from Cage Match who played the show as well ) where they had dogs instead! After another beer and some good stories about wacky Arizona politics, we slept the sleep of some tired -ass dudes. The next morning Eric and his wife took us over to have omelet's and huevos rancheros. Aced!

Finally, we are on the west coast proper! Beautiful drive as usual; desert (90-something degrees), ten minutes later mountains and valleys (75 degrees). That drive always gets us amped because we know we're about to be in the one place we've been dreaming of going of since we started playing music and wanted to tour out west; In n' Out burger! Sure enough we get to the Che Cafe and there's one just four miles away. There were other places to eat closer than that recommended by Justin (Ghostlimb) and of course we completely ignored him. We'd have our brains animal style if they had In n' Out on the east coast. Half- hour later, suffice to say we were good to go. Ghostlimb was sick! Saw our boy Kev (ex-g'orlock) and then Capsule got loose and closed out the night. We went by the grocery store for some PBR's after the show and crashed with our friends (Richmond, VA natives) Miles and Erin. In the morning Miles showed us how you make some f**kin' eggs.

Got to LA around 2 pm and we were ready for some serious Mexican grub! Hit up Hugo's tacos on Fulton in Sherman Oaks and walked off the Burrito coma in Venice Beach with some old Miami friends. Couldn't help but think if South Beach (Miami,FL) was f**kin' awesome, it would be Venice Beach. Now don't get me wrong, Miami Beach is home, but if it was kush doctor, frozen yogurt and pizza in a never ending succession all the way down Ocean Drive, it would be Venice Beach. We borrowed Alex's good friend's car to drive there, which happened to expel its coolant all over the parking lot when we arrived. Hence on the way back to pick up our Capsule caravan, we started to smoke - like a waffle house waitress taking a five (well, not that much) and had to pull off the 101 onto Muholland Drive to let the car cool down. Regardless of our current situation and the possibility of being really late to the show, you still have to appreciate standing under a street sign you've only seen in movies where Naomi Watts makes out with other women. We got to the show right on time! Show was great! Played with 10,000 leagues ( Hanna's new band /formerly of Lautrec) and had a few beers with Matty, another of our Miami crew relocated to LA. If what we hear is true and LA weather is always like this, Capsule boys will be relocated as f**K.

Ventura,CA â¦.ahhhh what a town. We got there around 3pm -

*We drove to Santa Monica earlier to do a live web-cast interview around 1pm and luckily all our friends at home have lots of downtime because lots of them tuned in (about 420 views approx.) We chatted with Matt Longo in Burlington, VT (who with which we all agreed technology is the sh*t) and our friends got to ask us well thought out and insightful questions like, ' how long are your d**k's?' and "how many questions about d**k's have been asked?" The people at the Yowie were really cool, gave us beer and candy.

- Show was at Zoey's cafe and scheduled to start at 7pm, so we had some time to chill round town. We went over to John's house and of course this being Southern California, he lives walking distance from a killer Mexican joint! We stagger back to the van ( chile relleno coma this time around ) and head over to Zoey's . Definitely one of the highlights of the tour as far as bands go for sure; Residuals and Fell to Low were friggin' awesome! Then our boy Mike (glass and ashes, young livers, etcâ¦) and his new band stop breathing! killed it. We wrapped up the show with a little Capsule, then went over to Billio's bar and had a couple rounds with our new friends.

We had about a 5 hour drive to Oakland, so we got up early (about 10-ish) and John and his wife made us pink waffles and tofu scramble. As if that wasn't enough to start the day right, we proceeded to jump in John and Mike's cars and rode to the beach which was just a two minute ride on the interstate. Now, this wasn't just the beach, this was Ventura, CA; mountains bordering the coastline as far as you could see, ice cold pacific ocean, and millions of fingernail size sand crabs hatching and burrowing into the sand as the frigid tide ebbed and flowed. Yeah, sand crabs! Pair that up with some beer and a nerf football, it was easily one of the best ways to spend an afternoon. To our surprise and arrant disbelief, this is how you spend every afternoon in Ventura. Sadly, we had to leave and say good-bye to John and his family, our focus switching like steel trap to what lies on the road ahead; In n' Out burger!

The drive to Oakland, CA was serene - naturally after the beach/In n' Out combo we could've driven through a riot and it would seem tranquil - and we arrived about 9pm to the show at the Hazmat which was already under way. We met up with our friend from Beau Navire (also named John) and he had some really good news for us; No Ghost records arrived at his house that day! Ok, not the actual factual records, but test-presses of the vinyl with limited addition covers printed by Rorschach records. They came out pretty awesome and, needless to say, it was great to have a version of our new music for all our new friends to check out. Reivers played before us, then Beau Navire closed out the show. After the Capsule set however, Alex confessed that if I didn't drive him to Wal-mart (the only thing open after 11pm in Oakland, CA) he was going to shit his pants. The Hazmat isn't really known for it's immaculate restroom facilities, so -having been in that situation myself - I obliged him. We got back from the shit-trek and went over to Johns' ( Beau Navire), had some more beers and watched Gremlins 2 â¦..because it's awesome!

Woke up early ready to head to San Fran and have lunch in town. Always gorgeous in SF and there was no way we were missing out on our day to hang out in the bay area, unless, we have to wait for another package of our merch to arrive in Oakland, effectively killing our day until show time. Awesomeâ¦ever walked around Oakland in the daytime? It's like taking a stroll through New Jack City except with perfect weather and palm trees. So we opted to drive to the supermarket, pick up some sandwiches, and it was back to Johns' to watch the simpsons season 10 dvd while the package slowly snailed it's way through the choked intestinal lining of the postal service.

Got to the show at Five Points Art House around 7pm. The fine gentlemen (and lady) of Prizehog (who are good friends with our boys in furnace from Boston - f**k yea!) opened the show; probably the most massive sounding three piece I've ever heard, and they don't even have a bass player. Capsule was up next, and everything seemed to gel like ice cream and beer until after the set; Alex showed us his finger which apparently suffered severe lacerations caused by beating the living sh*t out of his drums. The tip of his forefinger got caught between the rim of the drum and the drumstick, and given the speed and ferocity with which seems to be the only way Alex plays drums, the end of his finger was literally guillotined by steel edge of the snare drum. There was only one thing to doâ¦ and that was to amputate. Colin held him back with a guitar strap and Ryan supplied the anesthetic a la' half-empty New Castle to across the cranium. All we had were my wire cutters and some single-ply toilet paper from the men's room, but I've seen House like a thousand times and I've got a strong stomach when it comes to blood - especially if it's shooting like a geyser across the stage and all over the gear. We're sure when Alex wakes up he'll feel like a new man and thank us and by us a round for being such great friendsâ¦

Ok , that didn't happen, but he did need a band-aid after the set.

We headed over to Jon's (yeah, another Jon - our boy from L'antietam/Boston) afterwards and had a little night-cap.

Anybody know how long it is from San Francisco to Portland with a van and trailer? Yeaâ¦ wake me when we're loading in.

Drive went by quicker than I thought. From cloudless skies, to rain, to snow, back to rain, up the mountain, down the mountain; the northwest can make a 12- hour drive seem pretty exciting. We arrived at the Red and Black cafe just in time for Kid Crash to hit the stageâ¦ Well it wasn't really a stage as much as the floor in the middle of the cafÃÂ©, but the place was packed and they had a full vegan menu and IPA's on tap. Already this is topping our last visit to Portland by leaps and bounds -

*Our last time through, Tragedy was playing in town and the promoter figured that's where everyone went instead of coming to our show. Naturally we thought ' hey, it's not everyday Tragedy is in town,' and headed over to catch the set ourselves.

Kid Crash was super tight! Then after the Capsule set, Duck little brother Duck ( local homeboys ) tore up the joint! Another great show with great bands! Our boy Mike ( another good friend of our brothers in Furnace/Boston) brought us over to his place afterwards for beer and HDTV. Colin found his keys he lost in Houstonâ¦in his pocket. Long storyâ¦

Woke up and Mike drove us over to a sweet breakfast spot, then over to the Bluffs looking over Portland's industrial district. Like I said earlier; leaps and boundsâ¦

Music: I Can Make A Mess Like Nobody's Business: "Connected"

Music: Long Island Fest adds I Am the Avalanche, Such Gold, Trapped Under Ice