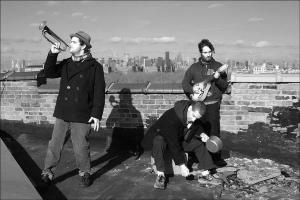 The Circle of Life: Mischief Brew Although there are lots of punk bands that are influenced by folk music these days, few are so deftly able to tap into the essence of the genre as Erik Petersen. Informed by folk titans such as Utah Philips and Cisco Houston, Petersen creates music that rocks, but music that also understands the life of a manual labor instead of merely commenting from afar. Indeed, in his day job, Petersen works as a carpenter… much like Jesus. Now over a decade old, Mischief Brew continues their theme of working class rights through both understated, acoustic ballads and furious hardcore smashers, even after a long day of cabinet construction.

In 2000, semi-popular West Chester, PA act The Orphans were coming to an end. Petersen, the lead singer for the Orphans, quietly released a demo cassette under the Mischief Brew moniker called Mirth, or Certain Verses Composed and Fitted to Tunes, for the Delight and Recreation of All. While the demo was greeted with muted reception, it forecasted the unique anarcho-folk that the group would flesh out by their first LP. How did the Orphans come to an end and Mischief Brew start?
Well, you know, it was just the right time. When you're sixteen, seventeen, or eighteen, you're not thinking long term about how the band will work. You are just doing, reacting and screaming to everything around you. Once you turn eighteen and everyone realizes what direction they want to go into, it just fizzled away for no good reasons. We are all still friends. What I wanted to do was explore acoustic instruments and different genres and styles and medieval style of music and gypsy punk, that sort of thing.

Was there an overlap between the end of the Orphans and the beginning of Mischief Brew?
There's an overlap. I was definitely writing songs which did become Mischief Brew songs, and some I'm happy we never did anything with. You can see on the Orphans' CD, the song "Kentucky Anarchist", that was written for the Orphans but performed by Mischief Brew.

What caused you to start a band equally influenced by continental European music and punk instead of another hardcore punk band?
I don't know. I was just a total hippy. Maybe it's a stylistic thing. Maybe its just that I'm really drawn to Medieval art or Flemish art, or maybe I just like the renaissance faire a whole lot. I didn't want to just play a gypsy punk band. I didn't want to be a celtic punk band. My goal was, and still is, was be a punk rock band that incorporates anything we want into the song.

What do you think of the label "Gypsy Punk?"
It doesn't bother me. People will give bands any label they want. It's also fun to see the different genres- someone called us, "cow punk." Cow punk, gypsy punk, Irish punk, we're really none of the above, all of the above.

In the compilation tape, which included your earliest recordings, Boiling Breakfast Early, you described your early music as a little too, "middle earth." What did you mean by that?
Lyrically, mostly. The lyrics are fun, buy they're very renaissance faire. The language, the antiquated words. There was a time when I almost wanted the band to sound like they could have been in the 15th Century. That's not my goal now.

How was the first demo tape recorded?
I actually recorded it in my parents basement. My brother Drew got a four track and showed me how to use it. Over a day or two, I decided to mess around with these songs I was working on. The mandolin, guitar an vocals. It was for myself, really. I played it for Denise [who is now my wife and co-operates Fistolo records], and everyone said, "Make it your demo." It was totally accidental and totally raw. It wasn't done in any kind of professional way.

Why did you select the name Mischief Brew?
Iâm always jotting down what I think are good band names. There was time when we didn't know if that would be the label, tape, or album. It had two of my favorite things- mischief and brew. We like Mischief and for brew, we are alcohol enthusiasts, and coffee enthusiasts. I like the way the words went together and it was timeless. It fit into any style of music.

In 2011, Mischief Brew released The Stone Operation., an album that both retains the group's peculiar junkyard punk sound, but has somewhat of a darker tone and harder sound than past efforts. Why choose the The Stone Operation, a method for curing insanity, as the title of your album?
Much like we figured out the name Mischief Brew, we wanted something obscure. Something that sounded mysterious but was easy to figure out what it was. I was interested in flemish artâ¦ I love Hieronymus Bosch. It refers to that. It refers to the whole concept that if you want to create good work, you have to loose your mind.

Do you think your work as a carpenter affects you music output?
Absolutely. We're traveling around and writing about different destinations. That's what I do, 40 plus hours a week. I see the structure of a song just like building a house. Plus, thats who the type of people I spend my time with are- the workers, struggling to make ends meet. Those are my people. Those are the people I sympathize with.

Do you think your day job makes you more qualified to comment on the topics that you address than people who haven't done as much manual labor?
I wouldnât say that Iâm more qualified. On any day, there are massive amounts of people whose jobs are ten thousand times as worse. I would say that getting out there and expressing different trades, and different lines of works, even if it sucks, it will make you a stronger person. That could be stronger physically, or making you more qualified to talk about issuesâ¦ less of an armchair revolutionary. It's easy to just talk about stuff. It's harder to get out there and do it.

The new album was recorded in a church turned into a studio. Do you think that affected the sound?
At times. Definitely in terms of the space. The studio was not a creepy old church. My friend lives down stairs, its not cramped. But, rather than load everything with reverb later, we recorded in a different corner of the room for a more roomy sound. The size of the recurring spaceâ¦ it's a laid back atmosphere. It's not like being in a studio for ten hours a day. We definitely took our time with this record.

It has been 5 years since your last full length studio LP. How come?
I donât know. I am lazy. Partially, it's been weâve had stuff in the works: The Joe Jack Talcum [of the dead Milkmen] split, the collab with Guignol, the singles. Those things made me take my time. Iâm glad that these are the songs that we did with these arrangements. I would not have it any other way.

"Drinking on the Home Stretch" on The Stone Operation tells the tale of you and some other contractors droning on a rich guy's property. Is that a true story?
Iâve always wanted the records to feel like a soundtrack to a musical. Iâve always wanted to feel like your hearing about characters. The record as a whole is a darker recordâ¦ it's darker and more aggressive, and something fun and has a sing along drinking song.

"Drinking on the Home Stretch" is a simple song about working on a house and the guy that owned it was a total jerk. These two Irish brothers, who were also working on the house, brought back a case of beer for no other reason to be nice. We sat around and just talked. We had been working on the house and just kind of commiserated and talked, laughed. The needless barrier breaks down and you realize also that, "Wow, weâre sitting here on this piece of property, and that if this [gathering] is done a month from now, we would be put in jail. This is last gathering on this land."

On the last track, you have a secret track called "Drinking Song From the Tomb." I find this interesting, both because it's hidden, and it addressees our mortality. is mortality something that frequently concerns you?
We got on a Rudimentary Peni comp. I thought, "Well, everyone will want to do a song from Death Church. So, we'll take one of those weird songs on Cacophony," which has all these short interludes, Lovecraftian with cackling. I wanted it to sound very folk-metally, and thats why we fuzzed out the guitar tones. We tried our hands at Mischief Brew playing black metal. It was supposed to be for that comp, but Sean convinced me, and said the record has to end with it. The record should end on a strong note, so we totally brought out the guns.

The new album mentions Romania, Dallas, Paris, Nevada, and hell. Why is The Stone Operation such a destination oriented album?
It wasn't until I started laying out the sequence that I noticed that. Weâre in the Philadelphia suburbs. You kind of have to go on adventures lyrically. I want to feel like the bands I listen to. The lyrics I read are people that have traveled around and experienced the stuff. Iâve never been to Romania. We can write about whatever we want and travel around the world. I hope the record we have is a ride to places.

The new record has an aggressive bentâ¦ more than we've seen int he past. Why do you think that is?
When you look at it, the record is very split half and half. I just think that the aggressive songs jump out. We didn't just sit down and say, "letâs make a negative record." I said we wanted it to sound big and loud. We don't want it to be they way weâve done stuff in the past. We basically just played the guitar on junky amps in one track, and the bass wasn't prominent. We wanted those things to jump out. We wanted that stuff to be hard.

In one sense, the songs that tend to be a darker tone, maybe its just us getting older. Maybe its having been in the punks scene which is a youth culture for so long. You're gonna have days were you are negative about stuff, and days were you are excited about stuff. What you hear on the record is totally how we feel at this part on our lives- which is totally crazy.

Any last comments?
Right now, weâve loaded our cannons. We have a new record coming out. We are excited to see what people think about it. It's how we probably wanted the earlier few records, as far as aggression to sound. We've made a record that mostly sounds like we do live, with all our junk instruments.