Contributed by alex101, Posted by Aubin Paul Tours 12 years ago

Concrete Jungle Records will be releasing the new record from the Adolescents. The record is titled The Fastest Kid Alive and is due out June 3, 2011 . This is the first new album from the influential punks since 2005's O.C. Confidential.

The band has also announced a summer tour spanning Europe, the UK, Australia and Japan. 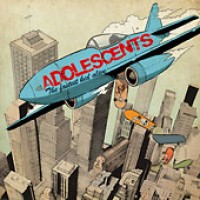