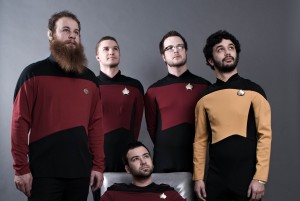 Protest the Hero makes music that could defined as a lot of different genres. What's your favorite type of band to tour with: somebody who is very close to the sound, someone who's completely different, or a mix? Rody Walker: We like to mix it up as much as possible but sometimes I guess that's not really good for ticket sales. We did an East Coast Canadian tour with a band…kind of a Judas Priest style band which was a lot of fun but it wasn't very successful.

That sounds like a poorly managed local show. Rody: Yeah it kind of was! Every night…[Laughter]
Arif Mirabdolbaghi: Since we don't quite fit in anywhere we go you start to appreciate little things about any bill that you're on. Sometimes when we play with really heavy bands we sort of enjoy that we aren't the guys that aren't screaming all the time and the times when we play with really soft bands and we enjoy being, like the,"tough guys".

Would you say that the newer the Protest album is, the more technical or difficult to play it is? Rody: Not necessarily, I don't think.
Arif: I think it's actually quite the opposite. The new stuff is a lot more technical, there's more of an intelligence behind the songwriting. But, I think a lot of the early material, we were just really young and enthusiastic so we'd try all kinds of wacky tempos and key changes and things that aren't exactly intelligible. So, when we try and go back and play them now it can be somewhat challenging because you have to get five guys to be really on point and just sort of intuiting where the next beat is going to be falling or where the next note is going to be coming from whereas now there's actually a rhyme and a reason for why we're doing some of those technical things. So, while it is more challenging it's a bit easier to play.

It's sort of like the better you get at [writing and playing] music as a whole, the more you make the music work for you instead of, you know, the opposite. Arif: Couldn't have said it better myself.

The new video for "C'est La Vie…" what's the deal with everybody sitting down? Rody: We don't like shooting videos, man.

Laziness? Rody: It was probably 21 hours that day I was running around like an idiot.
Arif: I was in there for about three hours…sat in the chair, played the song about three times and then I was on my way home after that. It's just hard….video shoots are all this waiting around and it's a giant waste of Canadian taxpayers money. We just elected a majority conservative government in Canada, eliminating all these grants and things that have been so kind to us and I think it has a lot to do with the fact that people see these ridiculous videos that we do and say, "Why should my hard-earned money go toward these fuckin five yahoos doing whatever the fuck they want, blowing their wads on these shitty high-budget videos --"
Rody: "--when our money could be going towards good Catholic schools…"

…hence the sitting down. Arif: Yes, hence the sitting down. It's just more comfortable. When you're standing you feel like you gotta be jumping around or doing something like that and you already feel dumb enough because you're not plugged in and you're playing along to a backing track. So, to add a performance aspect on top of that, it's so hard to make that look cool.
Rody: I mean, I don't think we've ever done it. For me it's impossible, absolutely impossible.

Yeah, I think it's the only music video I've ever seen with guys sitting down besides, like a country video. So good job on that. Arif: We're gonna be sitting on a porch talking about alimony for our next video.

So I've heard that the band is not only influenced by Propaghandi but that the song "Sex Tapes" in which [Propaghandi vocalist] Chris Hannah does guest vocals, also is about Propaghandi. Can you tell me about that? Rody: That's not the song that's about Propaghandi it's another one, but it is the one that features him singing on it. There's another song that kind of goes out to them a little bit more called "The Reign of Unending Terror", which I think is like a pretty good summary of what their career has been: a reign of unending terror.
Arif: But, I know for us it was really meaningful for Chris Hannah to do a vocal guest spot on our record. We've been big fans since we were little tiny things.

Have you toured with them? Arif: Yeah, once in the UK. That's probably the only tour in which I felt like more of a fan and less of a participant on the tour. We'd watch them every night and hide in the corners so they didn't see anyone.

Didn't see the hopeful look on your face…maybe they'll watch me and invite me to join the band…[Laughter]. So, tell me a little about the Scurrilous book you just put out. Arif: Ah, our two guitar players work hard and toil over transcribing some of the music and writing it down and they do it all themselves, so hats off to them. And they started their own publishing company called Sheet Happens and now they're starting to transcribe for other artists including Propaghandi and Unearth and some others. I think it's probably in response to the fact that all over YouTube there's these kids playing our songs, oftentimes better than we do and they just wanted to have one definitive source that everyone can go to. And [they wanted to go out] and make a buck off it. [Laughter] Which is fine because they put a lot of time and effort into it.

Right, right. Yeah they deserve that, why not? What would you say the toughest thing about being in a full time touring band is? Rody: Not going gay.
Arif: Not going gay. That's the biggest…

Alright, let me rephrase the questions: on a scale of one to prison, how hard is it? Rody: I don't know, you end up missing pets at home a lot…dogs and cats…

I thought you'd say, like girlfriends…but….pets, Ok. Rody: I don't know…girlfriends get a little tired sometimes. I don't like to go home for six months or something like that. What am I gonna do? I don't have that many tricks in the book. But a dog is forever.
Arif: Well, they're not forever.

Yeah, forever divided by seven. What is your most hated interview questions? What do people ask you that you wish they would not. Arif: What's the craziest thing to ever happen on tour?
Rody: Tell us some crazy fan story. Also, my personal least favorite is, "do you have anything else you'd like to say?"

Cuz at that point what do you say? Thank you to the fans, dot dot dot… Rody: Basically, at this point I like to ask them back why they felt it necessary to ask that question. They're like, "Well, everybody else does." It's like, "Yeah, don't."

Archers of Loaf reissues on the way