Matt McHughes (Over Stars and Gutters) 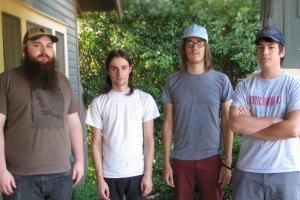 Matt McHughes has been a part of the Oklahoma punk scene for awhile. He first gained success with his old ska band Third Grade Scuffle. As the years passed, Matt formed Over Stars and Gutters. With a gruffer sound, more mature lyrics, and a beard that was hard to rival the band started to gain national recognition, capped off with a performance at Fest 9. Matt took the time to sit down with Punknews interviewer Alex Eschbach to talk about the growth of the Oklahoma scene, the constant line-up changes, and how growing up has affected his music.

How long have you been growing that epic beard?
Iâve had a beard for several years. Iâve shaved it completely off a couple times. Iâve trimmed it. I donât knowâ¦ I think the last time I trimmed was to go to wedding in July. We definitely have some gnarly beards in the band.

The Fest 10 has announced some of their lineup. Any chance you guys will performing in Gainesville come Halloween weekend?
I hope so. I think weâre one of those bands on the bubble right now. Youâve got so many great bands that have played. Itâs still early and you donât know what venues are going to be available. I know Tony mentioned some of the smaller venues arenât available. But Iâd like to think weâd be one of the bands who has played that will be asked back.

Your lineup definitely seems more stable now. Do you think you guys will be able to start touring more often?
Thatâs definitely a goal we have. Weâve filled out the new rhythm section before we did the demo that we put out on October. The same lineup recorded that demo. Not taking away from any of the lineups in the past, but this is the lineup that Iâm most excited about just because of who we are as people. The original lineup that did Consider This Your Curse, they were younger. They understood the core of it all. It was different aspects of life that we were in. Now Iâm playing with Wayne whoâs like a brother to me. Itâs funny how much weâve grown up. Even though he came up in the hardcore and metal scene, just how many bands we both loved growing up. With the lineup now weâre really looking forward to writing, really looking forward to putting out another record and definitely looking forward to getting out on the road.

With this new lineup what can we except from the new album that will be different then Consider This Your Curse?
I think weâve gotten a lot meaner. With the voices that come with Wayne doing the background vocals live, we have guys that are a lot more confident doing the style of vocals that we do. I think thereâs a real desire to push the limits of our songwriting. When you listen to Consider This Your Curse you definitely knew the influences. I think on the new stuff weâve been writing we push it a little bit more. I think itâll be a little heavier and meaner, but also in the other direction as well. I donât think it will be as straight forward. It will be more into the idea of trying to great songs instead of writing punk songs.

With the new lineup has your song writing process changed at all?
I donât think it has. Iâve always written with people. Iâve never been the kind of person to just write a song and just show it to them. I like to work with the people in the band. Those dynamics are necessarily different. In fact, the demo we wrote those five songs were written on three different nights in Tulsa. It was all of us brainstorming, putting our heads together, coming up with an idea, and then just putting it together. There have been a couple of things that weâve tried to expand on. Digitally weâve been recording a lot and sending ideas back and fourth because we have a guy who lives two hours away. Itâs just an easier to say, "Hereâs an idea we have." But at the same time we show up to practice and everyone already have their ideas. The whole point is to do the best we can for the song. Thereâs no one voice. Thereâs no one person saying this is how it has to be. I just think songs tend to work better that way for us.

Youâve been a part of the Oklahoma punk scene for a long time. Whatâs changed over the years?

I donât know. I donât think thereâs been a whole lot of change. It seems like the scene has always had a lot of really good bands and some decent venues to play at. If anything, I would say right now the only thing thatâs changed is a national recognition of some of the bands. Some of the bands are starting to go and get out and starting to tour more. Even when I was just starting out, there were bands. A band that comes to mind is The Roustabouts. They were touring, they were putting out releases on smaller labels. But I feel like now youâve got bands like us, Red City Radio, and John Moreland & the Black Gold Band (even though theyâre basically John Moreland now) have raised a little bit of national and even international awareness. A lot of that too has helped with the way the internet has grown. When we first started it wasnât as easy as it is now to get a hold of bands. It was easy, but not like it is now. A lot of these bands are all getting to the point where theyâre on their way. Theyâre trying to make something happen. Thereâs always been a lot of great bands and thereâs always been an ebb and flow of what venues to play it. But I feel like right now is a resurgence for Oklahoma City. Youâve got some bands really trying and some really great upcoming bands as well.

Whatâs different about right now thatâs causing bands like you guys, Red City Radio, and John Moreland to start hitting on the national scene?
I think thereâs two parts of it. I think thereâs the amount of talent and how itâs all coming together. Not only are we having great bands but theyâre going to Stephen Egerton and Armstrong and recording records there. When you have a record recorded as well as he records them and by a name as big as hisâ¦ people tend to take notice. Also, I think it has to do with the drive of a lot of these guys in these bands making it happen. Theyâre saying, "What we have right now is really good. Letâs see what can happen." A lot of it comes back to us growing up and loving the same punk rock band and seeing what it means to be in a band. A lot of these guys, weâve all been touring for years. Not necessarily touring to extreme levels. But weâve been trying to get out on the road for awhile. Itâs all culminated to a bunch of good bands that have the desire to get out there.

Youâve grown up over the years as well. At one point you were singing about, "walking S.T.D.âs." Whatâs changed with you that caused your music to mature?
I think when I wrote that song I was probably around sixteen-years-old. You definitely have a lot of changes that go on. You grow up immensely from the time you were in high school to the time youâve been out of college. Youâve had to work and had to sustain what life is. A lot of it came through college, becoming political minded in college but also losing faith in that same thing. Thatâs where a lot of what we sing about now comes from. The maturity thing happened. Itâs funny, I still listen to those old Third Grade records every now and then. Theyâre never as bad as I remember. I just expect to turn it on and cringe. But what do you expect a sixteen-year-old to right about? Iâm twenty-seven now. Iâve seen a few more things. A lot of that too is not only life experiences, but music as well. What Iâm listening to now is definitely not what I was listening to then. But at the same time itâs all been this progression.

Kind of like the Slapstick progression.
Yeah, exactly. I think it is funny. I guess this is what you do when youâre ska band breaks up. You get a little older, a little more jaded, and write songs about drinking. Well, I guess ska bands do too.*laughs*

Music: How Dare You featured on Switchboard Sessions