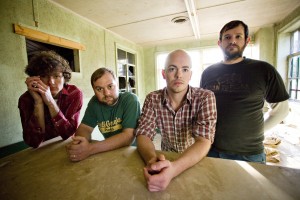 Since their debut album in 2004, Ninja Gun has logged thousands of miles in their old church van, and restlessly dedicated themselves to honing the craft of hook-driven pop bliss. Whether it's in the form of punk-tinged power pop, or rootsy twang porch hollers, Ninja Gun's constant quest of melodic perfection has arguably reached its peak on their newest EP, Roman Nose. Punknews interviewer Michael Dauphin recently chatted with front man Johnathan Coody to discuss all things Ninja Gun.

You have said that Ninja Gun may not have been fully prepared when they took on the recording of 2008âs Restless Rubes. Was it too big of an endeavor, or was it a financial or mental thing? .
With Rubes, it was all that. It was a matter of being broke at the same time as we were trying to do something huge and, really, impractical. It had its fun moments, too, but it was just stressful. We really focused on making it just how we wanted it. We wanted to make an album that were proud of and not make us cringe. And we did that. Hopefully, the next thing we do, will be more of a stripped down, guitar rock album.

Was that part of the beauty of only taking on an EP with Roman Noseâonly focusing on four songs? .
Yeah, when youâre only concentrating on four songs, itâs easier to allow yourself more time to explore while youâre recording. And we had never done an EP, which I like the idea of. I think I want to do more concept EPs that are only 4-5 songs; little, short packages of something.

I wouldnât call Roman Nose a huge departure, but it sounds like you guys spent more time focusing on the arrangements. Roman Nose probably has a little more texture in certain places. Rubes had that tooâ¦ The EP probably has more baroque elements. The theme of it was kind of to keep going with whatever we were working on. And after we were done writing and arranging them, I think that showed up in the recording.

Thereâs a deep sense of location in your writing. You can hear the influences of Georgiaâspecifically Valdostaâlife in your lyrics and soundscapes. Considering how much your town influences your writing, could you ever see yourself relocating?
No, I donât think so. I like living hereâIâve lived here my whole life. We get to see so many other cities while on tour. I like being able to have money and just live in the South. A lot of cool stuff has come from here.

Do you still work on your fatherâs farm?
Yeah, I was doing some farm work just yesterday. And I wash dishes at a restaurant.

Last time I spoke to Tony [Weinbender - No Idea, Fest], he was telling me about some epic bachelor party you guys hosted in Valdosta.
[laughing] Yeah, that was Will from Grabass Charlestonâs bachelor party. They all came up from Gainesville and stayed with Jeffreyâs [Haineault - drummer] trailer. Jeffrey has this stuffed cat from this voodoo store in Quitman, GA. And this stuffed cat is holding a baby in its mouth. And the cats ended up with cupcakes all over it. Jeffrey lives on a dirt road and all these Florida dudes came up and three of them drove into a ditch. It had rained the night before and they were stuck pretty good. Jeffrey was trying to use the van to pull them out, which wasnât working. So I had to get my dadâs tractors and pull those three idiots out.

While you donât really play punk music, youâve more-or-less been adopted by the punk community. Was that a conscious effort or did it just happen due to the company you keep?
I kinda look at it like, in the early days of punk rock, all those bands that were doing anything subversive or out of the ordinary, they all operated in the same context. If you were DIY, thatâs how you did it. You get out on the road and go at it. Weâre all out there doing the same thing, playing shows in whatnot. And we just happen to share the same type of mentality and ethics, to some degree, as a lot of punk bands. I think we fit in in that way.

But the fact that we donât sound like some of the bands we play with has never been an issue with us. The last show we played in Germany last year was with 5 different crust bands from different parts of Europe. There was the French crust band, the Belgian crust bandâ¦ They had the strobe lights and shit. Jake and Jeffrey had gotten sick the night before. So Thad and I get up there and play our electric guitars and 1 vocal mic played our jangly pop songs to all these crust bands. I remember just thinking, "man these people are going to fucking hate this." But they were stoked. They got it and they respected that we could present that in that context. And Iâve always been proud of that: that we can present our music even when itâs technically out of the punk rock context, but we make it work. Iâve always enjoyed playing punk shows like that.

It seems like Ninja Gun is really a "bandâs band." Would you agree?
Yeah, I think weâre the kind of band that, if you donât fit comfortably in a marketing spot, itâs going to take a music fan whoâs willing to take a chance or listen to something thatâs a little bit out of the ordinary. People have an innate desire to categorize thingsâthey want things to fit easily in their brain. If you present something to somebody and it doesnât really [fit] because itâs a little more expansive, itâs kinda hard to take sometimes. I donât knowâI think maybe the content of what we write sometimes is a little heavy for melodic pop music.

I think "Thatâs Not What I Heard" from Roman Nose is a good example of that: dark subject matter on top of extremely poppy music.
That was definitely by design. A lot of times, when Iâm listening to new music, I first get drawn in by the melody, the percussion, the hook. I always liked it when you listen to a song and after the three or four listens, the meaning of the song starts to reveal itself in the lyrics. With that song, we wanted the melody to pull people in and eventually the lyrics will sink in. As opposed to a hardcore song where youâre screaming the lyrics, we wanted to pull people in with the hook. Thatâs kind of how we thought about this song. If we want people to listen to this, we better have a badass melody. That song was unique, too, because it was the first time we built the song up with acoustic instrumentation and added to it.

How are you guys received in your home town?
Pretty good. When you say youâre in a band here, the average person just assumes that youâre in a cover band. They just assume that you play the hits of yesteryear. And the idea that someone from their own backyard would write their own music, doing something creative and out of the ordinary, is unfathomable to a lot of people around here. Try telling people in South Georgia that you ride around in a van playing songs for little-to-no money. They wonder why anyone would do that.