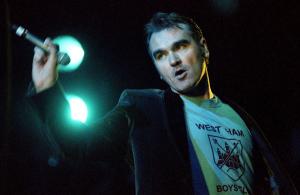 by Bryne Yancey Europe 11 years ago

In a recent interview with Pitchfork, Morrissey discussed his label problems in great detail. His follow-up to 2009's Years of Refusal is completely written (and three new songs slated to appear on it were recently debuted by the BBC) but Morrissey is refusing to record anything without a record deal in place. Here's an excerpt from the interview:

"The entire "industry"-- as it must be called-- has been destroyed in a thousand ways. The Internet has obviously wiped music off the human map-- killed the record shop, and killed the patience of labels who consider debut sales of 300,000 to not be good enough. People no longer know the top 75 charts, and what they do know of them they don't trust because chart-placings are so fixed-- everyone on the planet mysteriously flies in at number one now. The music press has died because of Internet People Power-- everyone is now their own expert critic. As a consequence there are no risks taken with music anymore-- no social commentary songs, no individualism. This is because everyone is deemed instantly replaceable."

Read the rest of the interview here.

Videos: Moving Mountains: "Always Only For Me"