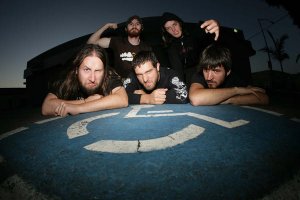 Guitarist Mike "Gunface" McKenzie revealed via twitter that The Red Chord has begun writing their next album. Here's the update:

"I've been pretty inspired to work on TRC songs lately. Maybe 6 or 7 songs are on their way. Our silence is coming to an end!"

We'll keep you updated on any developments. The band last released Fed Through the Teeth Machine in 2009 via Metal Blade.