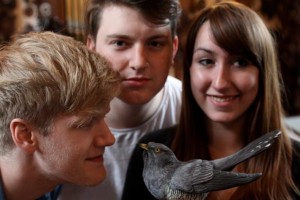 Great Cynics recently hit the road in the UK for a tour with The Living Daylights. While on the road, the band documented some of their adventures and we present the second episode here.

Itâs halfway through our UK tour with The Living Daylights and tonight weâre playing upstairs in a bar in Truro, Cornwall. As We Sink! are the only other band playing, and they rule. Theyâre from around here and sound like a heavier version of Bangers. Probably no surprise since Iâm pretty sure Bangers are the only existing punk rock band from Cornwall. Afterwards we drive the two hours back to Ionaâs house near Exeter, drinking boxed wine and listening to AM Taxi on repeat. When the last drops of our boxed beverage are consumed I make a foil pillow by blowing up the empty inside of the box - a little trick Bill Boa from Leagues Apart taught me. One of the few traditions our band has is skinning up just before we turn the light off when the three of us are sleeping next to each other. We continue the trend while listening to Limbeck.

The next night in Plymouth we play to the least people on this tour so far. Itâs the biggest venue weâll be playing this time around, and I count 8 people during our set. Half an hour after The Daylights finish, people are piling over each other through the door for the punk/pop/disco club night, which follows the show. I head back the van to change shirts and use some musk so I can cover up my stench to smell like a box of roses on the dance floor. Bars seem to never shut in Plymouth, but we eventually decide to call it a night and crawl back to Darren from Crazy Armâs house. We sleep in the room next to his and Iâm not sure exactly whatâs going on in there, but until 7am it sounds like children running up and down the stairs. Darren is still drunk when we get up and the stampeding children mystery is long forgotten when we learn that Dez from The Daylights did a shit in plastic bag immediately after waking up in the van that morning.

After the Kingston show that night - the release party for WeGrowBeardsâ first album - we drive to Hackney so we can go straight to Joeâs studio in the morning to record a cover of "Anything" by Samiam for the Death To False Hope Records tribute comp. Joe plays drums in Apologies, I Have None who are all massive equipment nerds (donât get into a conversation about guitars with Dan Bond if you like your ears), so we trust Joeâs opinion and go along with what he tells us to do. Apart from the half-day recording, we spend the next two days mostly hanging out on a roof, getting drunk on cheap booze and watching Peep Show.

The next two days meld into a blur - we head to Brighton straight after we finish in Basingstoke and go to the venue immediately after waking up the next afternoon. Nonetheless, both shows are banginâ; Norwich is always a party and this time itâs no different. Itâs our last show supporting The Daylights so we wrap them in parcel tape and cover their heads in tin-foil on their last song. And they didnât even fuck up one note, damn professionals. We hang out after at Pete and Lucyâs where we ogle at their original Descendents painting and wall of skate decks for at least an hour.

The next morning weâre back to where we started at Kieran Kellyâs house. We have an emotional goodbye with The Daylights and Denzel before stopping and realising weâre being huge, utter pussies and head back down South. As I type this, weâre on our way to Southampton where weâre playing with Algernon Cadwallader and 1994! in a practice space underneath a bridge. Itâs our last date on this run, which is only our second tour since Iona and Bob joined me and we became a band. Now I canât imagine it being any other way and Iâm stoked to get back on the road for the house shows weâre doing next month.

Contests: Win a bunch of stuff from Polar Bear Club