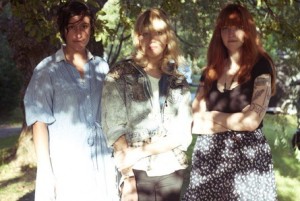 By this point, Vivian Girls are battle hardened. Although they kicked off their career with a meteoric rise fueled by blog popularity, they also suffered the inevitable backlash of the fickle internet. Shortly after their rise, they often became the target for sexist, rude, and unfounded criticism by faceless critic user tags. But, now that the group has made it through the gauntlet of web-hype, and have established themselves as a full time band, it seems that conflict was the flame that they needed for forge their art. Just this past spring they released Share the Joy their third (and best) LP, which features the group grasping equally for the avant-garde and the classic.

Because the Vivian Girls are on tour supporting the release, staff writer John Gentile called up Vivian Girls front woman Cassie Ramone to talk about what the group is up to, how women are (and should be) treated in rock, and why the group resurrected Death.

Often, in interviews that touch on the "Women on music" topic, the person being interviewed will be asked to sum up the position of their entire gender… just as I am doing nowâ¦ Is that daunting?
Itâs really annoying. People are completely unaware of how they can come off. Like we did this one interview, where they asked if we had fights over the hairdryer, or if it was a constant slumber party. I know that the interviewer was trying to be funny, but a guy band would never be asked something like that.

What types of questions have you been asked where the interviewer didn't realized that he or she was being sexist??
The hair dryer thing, definitely. I think that, generally, we get asked about the all-girl thing quite a lot. I don't even know how that's an interesting question. I've been in band with mostly guys, and an all girl band, and half and half. Every single band is its own thing. Every single band is entirely determined by the personalities by the people in the band. I don't see how gender specifically makes a band what it is.

Do you think gender is irrelevant in determining a band's composition or how a band will express itself?
I do not think that gender is irrelevant. There is definitely a difference between men and women. It's hardwired into our brains. Being raised as a woman, there are different expectations on a person. I don't think gender is completely irrelevant, but it's not something that that should be so focused on.

Do you think that sexism is either more or less prevalent in the punk/indie scenes?

Thatâs hard to say. I think that the punk scene that we came out of, that we originally started in, was really positive towards women. It was only when we started getting a lot of attention, and on blogs, that sexism rears its head. Iâm not really sure that it's better or worse. The thing that is once you get written about on pitchfork, I think those blogs can barely even qualify as indieâ¦ The bands on those blogs are huge and sell thousands and thousands of records. [Bands like] Tv on Radio, Animal Collective, are huge bands. Once you get written about on blogs like that, you have to appeal towards a broader audience to be accepted.

Do you think those blogs are purposefully trying to be sexist?
I don't think they are trying to be sexist. I think that people writing for these blogs are completely unaware of what they are saying. I think the interesting things is when we are compared to Dum Dum Girls or Best Coast, or other all girl bands. Some blogs like to say which bands is better than the other bands. I think its subconscious.

You recently posted an interesting observation on your twitter, where you asked why all women in music have to be perceived as either "Goddesses" or "Radicals." Can you elaborate no that?

I was just thinking about the way women are perceived in music. Iâm just talking about indie music. I was thinking about how with greatly respected women, they are either really beautiful with technically good voices, and just seem like they are goddesses, or they are like Kathleen Hanna, or Lydia Lunch or Kim Gordon and completely go the other way and are like, "fuck the rules! I donât need the rules" and are really open about that. I wonder why there aren't more women in the middle. I try to occupy the middle ground.

The newest Vivian Girls record, Share the Joy, was a fantastic leap forward for the band. I feel that the band retained some of their avant garde tendencies, but also utilized a very classic pop framework. Was the group's evolution tactical, or did it just naturally occur?
It was mostly natural. There was a little bit of planning. We did talk about ways that we could expand our sound, but it was mostly natural. I would say it was 90% natural, 10% planning.

You also brought the song "Death" back from the single Moped Girls. Why did you choose to resurrect that tune?
We brought "Death" back, because it's a really good song, and it's one of our favorites. When we wrote the song, we wrote it like the day we were set to record that single. We threw it together. We recorded it and we really liked it, and we thought it deserved to be recorded properly.

Similarly, "Take him as he comes" off the new album really lit up the internet. Why was that song one of the stand-outs on the new album?
I guess because, thereâs some spoken word that is entertaining. I guess it's an easy song to notice. Itâs kind of our girly-est group song yet.

Vivian Girls started out as a very underground group, blew up in the age of blog hype, and then settled into sort of a more confident role. How has your audience changed?
Our audience has changed many times. When we started playing, it was all our friends, and friends of friends, and then it was kind of a lot of people who read blogs, and are like, "maybe Iâll check them out." Whenever we would play a show, I could feel that the crowd had a lot of judgment. That's why I don't like south by southwest. So, those shows weren't that much fun. After the blog notice died down, people who come to see us now, which are very lovely peopleâ¦ our audience is very diverse. Our number one fan is a fifty year old guy from Chicago. I really like our fans

Some performers focus on the audience to "entertain them" while others seem to be in their own zone, so they don't get distracted from their art. Where are you when you are on stage?
Iâm very receptive of the audience, so I have to be in my own zone. If I look at the audience, I get scared. I've set up a method where I can be on stage, but focus on the music.

So, do you like or dislike playing live?
You know, I used to dislike it, but, I grew to love it.

So, what's next for the Vivian Girls?
I dunno, weâre not gonna record another album for a pretty long time. We are doing a tour with Widows Peak in September, and then after that, weâre not sure what were going to do.