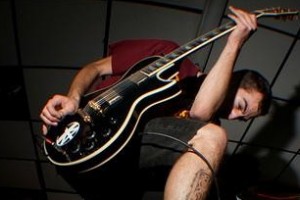 Off the bat of releasing one of the year's most surprising records (a Specials covers EP), Punknews interviewer Faye Turnbull caught up with David Kelling, frontman of California hardcore outfit All Teeth, while doing the rounds in Europe for the first time. They got talking about the aforementioned release, dealing the cerebral palsy and breaking into water parks.

You just played Hevy Fest in the UK today, how did you find it?
Hevy Fest was amazing. There were crazy fog and lights, which was kind of funny. Itâs always weird playing on huge stages, because a lot of the times when we play in the States, we play house shows, so then to play big shows with lights and a barricade… Iâve never ever in my life played on a stage with a barricade, so that was kind of different. There were kids singing along and security, and thatâs a crazy difference to what we normally play, and we went to the zoo beforehand, and saw lions and tigers, that was so insane.

Death Is Not Glamorous pulled out of the festival because of it being held in an animal park, you obviously didnât feel like that…
I knew this fest was with The Bouncing Souls and I never thought ever in my life that Iâd ever get to say that I technically got to play a show with The Bouncing Souls, and Make Do and Mend played today, then Defeater and Living With Lions playing tomorrow, so why not be apart of something that all our friends are?

Itâs All Teethâs first time overseas - did you have any expectations?
I didnât know what to expect at all. The first show we played was Fluff Fest and that was absolutely insane, it was crazy, so it was kind of funny to go from playing to that fest to then going to normal shows, so I wasnât sure about what to expect from the rest of it. All the UK shows were mainly just us and The Carrier, and weâve never been over here, so I didnât expect us to help much with the draw anyway. A lot of the mainland shows were with like Ceremony and Soul Control, and tomorrow weâre playing with Youth of Today and No Turning Back, so I can only imagine theyâd be better just in general.

You told me you played a show in Stoke (UK) to like three people, how is it playing a show with such a low turnout?
Yeah, there were like three kids there, but one of them was singing along, so that was kind of crazy. Like I said before, we werenât expecting anything, so the fact there was three kids and one of them was singing along, itâs cool, weâve never been here before. None of us came with the intentions with, âItâs going to be massive.â I mean, thank God, The Carrier is big, so itâs been a blast.

You seem like such a happy and friendly guy, but on stage, you almost become a completely different person - where does that aggression and intensity come from?
I donât know, maybe thatâs the reason why I can be happy in every day life, because I can get that 15 or 20-minutes to get out everything that I am feeling. I always say itâs middle-class, white kid temper tantrums, stuff that I think matters, but doesnât really matter.

Your mannerisms on stage kind of remind me of Ross from Ceremony.
I can see that, but I think Ross is one of the best frontmen ever, so thatâs such a compliment. Although, thereâs this band called The Nerve Agents from California that I saw when I was a kid. They made me want to play the music that we play now, and the way that he moved around was so sick.

Iâve noticed you have a limp and I think itâs awesome that you donât let it affect you; can I ask you the story behind it?
I have cerebral palsy, like when I was in my motherâs womb, my umbilical cord wrapped around my neck six times and it cut off my blood circulation to the left side of my brain, which controls the motor works part of the right side of my body, so it moves a little slower, so yeah, I have a limp, but it doesnât affect my cognitive abilities. I can fall over easier, but I fall over enough that Iâm used to it, so if it happens at a show, I donât care. [laughs]

Even when youâre not touring with All Teeth, you always seem to be touring with other bands, like The Swellers and Defeater, doing merch, why is that?
Ever since I graduated from high school, like everyone I graduated with, we were never on the same page as me. I grew up in a really, really small town and moved away, and I never really felt at home anywhere. Iâd rather just be with my friends, whether thatâs in one town or on tour, I want to stay busy. And also, I think a lot, so when Iâm on tour, Iâm always busy and I have fun.

Would you consider All Teeth to be apart of âThe Waveâ? Since you seem to be good friends with all of those bands.
No. I mean, we always knew Defeater from their old band and then got to know Make Do and Mend through Mike Poulin, whoâs also the bassist in Defeater. Then we got to know La Dispute from touring with Vass, their bass player, who toured with Make Do and Mend, I donât know, itâs funny. Like all the bands in âThe Waveâ kind of have their own little vibe and theyâre doing their own thing, and I just think weâre kind of a punk band. I donât think weâd fit in anything.

I recently saw on Mike Poulinâs [Defeater and Make Do and Mend] Twitter that All Teeth and Make Do and Mend snuck into a water park late at night while on tour, can you tell me about that?
Technically, Iâm not the best person to ask, because I was sleeping in the van while they were doing it. [laughs] They were like, "Weâre going to go to this water park…" and I was like, "Oh, ok, cool. Iâm just going to sleep in the van…" Then I was woken up a couple hours later to pounding on the door like, "Oh my God, weâve got to go!" So, I open the door and then the next thing I know, weâre all running from workers there.

You just released a ska EP of The Specials covers, which was pretty unexpected, how did that come about?
I donât know, it was kind of funny; we tossed around the idea of doing something kind of fun for summer. Like we play serious music, I guess, so we wanted to do something fun and we had time off, so thought weâd do something kind of out of our element. Like we have a ska part on the new record and all the reviews were either like, "Thatâs really cool." or "What the fuck are they doing?!" So, we thought we should just do a Specials covers EP. It was so much fun, our friend Scott, who plays in the band Hear The Sirens, recorded it and helped me with vocals. Heâs so good, he records in his parentâs garage, where we recorded Young Love and we recorded The Specials covers there. Then Chris, who sings in The Flatliners, sings on it as well. It was just cool, because Scott got to sing on it when he wouldnât necessarily fit on an All Teeth recording, and the same with Chris, even though Iâll try to get him on a real All Teeth thing, because The Flatliners are one of the best bands out there - Cavalcade was the best and weâre listening to The Bouncing Souls right now, thatâs like my shit, Fat Wreck Chords punk. I listened to ska when I was in 6th or 7th grade, and I was too young to go to like ska shows, and I saw The Flatliners on Warped Tour on my birthday actually, and that was the first time I actually saw kids skank, it was awesome.

So, whatâs next for All Teeth after this tour?
Signing to Fat Wreck Chords… [laughs] Nah, weâre playing Another Breathâs last show in New York, so as soon as we get back to California from Europe, then a week later, we fly out to the east coast and do like four or five shows. I think weâre doing Soul Controlâs EP release show, Another Breathâs last show, then Philly and a Massachusetts show.

Are you not playing The Fest this year?
No. Technically, weâve never played The Fest before, we just did a parking lot show with Paint It Black, Make Do and Mend and Defeater, and it got shut down before La Dispute and Touche Amore, but Iâm going to be there one way or another. Thatâs why I was so stoked about Heavy Fest because of The Bouncing Souls, not necessarily getting to play with those kind of bands, because The Bouncing Souls probably have no clue who the fuck we are and that weâre even on the show or anything. Although, I did run into their bass player and fan out super hard, and I plan on doing that to every other member of the band later, but just the fact I got to see these bands for free, itâs awesome.

Music: Make Do and Mend: "Coats"