An Oral History of Asian Man Records (Part 1 of 3) 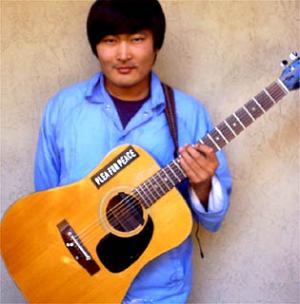 Founded in the mid-90's by Mike Park, Asian Man Records was one of the first labels to make its mission to be "nice" and to treat everyone, from bands, to fans, to distributors, with respect and general pleasantness. Somehow, Park's crazy plan to not be a huge douche and to not rip everyone off in sight worked, and Asian Man eventually coagulated into a well respected, almost iconic, record label known for putting out ska-punk (and other jams) by some pretty nice (and creative) people.

Over the years, Asian Man has released albums by Alkaline Trio, Slapstick, Less Than Jake, Bomb the Music Industry!, and Classics of Love. But not only has Asian Man put out records, inspired by labels like Dischord Records, Asian Man Records have enforced the concept of punk being a "positive space" and showed that not all punk is malt liquor and shooting heroin. Recently, Asian Man Records celebrated it's 15 year anniversary with five days jam packed full of concerts in San Francisco. So, to put a cap on the era, and to kick off the next, Mike Park recently sat down with punknews staff writer John Gentile to give an oral history of the label's last decade and a half.

In today's edition, the first of three, Park discusses the beginnings of Asian Man Records.

In 1989, Skankin' Pickle, a ska-punk band of which Park was a member, formed Dill Records with the purpose of putting out Skankin' Pickle Releases.
Dill was a collective among the Skankin' Pickle members, so I guess you could say that's where it came out of. It kind of came out of dill records. that's how I learned the beginning steps of running a small record label.

After the relationships in Skankin' Pickle began to fray, Park decided to found his own record label in 1996.
We had some problems amongst the band. I left the band so it didn't really make sense anymore to keep up the label. To be honest, I felt like I was doing all the work anyways. It just made sense for me to branch out. I remember clearly what happened- whenever you have a collective or start a business with a friend, you'll have conflicting ideas. Certain members will want to sign or put out records by bands that other people didn't want to put out. I saw the writing on the wall about how this could be a problem. I thought starting Asian Man would be an easy solution where all the ideas would be mine and no one could argue with me.

Skankin' Pickle and Asian Man did exist simultaneously for about a year and a half. It was 1996. I broke off and started Asian Man in May of 1996. Dill records moved their operations about 25 miles north of San Francisco. I think they lasted about a year or less.

When forming Asian Man, Park modeled the label after the template of Washington DC's Dischord Records, a label known for its direct communication and honesty with artists and fans.
Asian Man Records was started to put out my releases, but definitely to put out other people's releases as well. It definitely was an extension of Dill Records and I had been doing it for a few years prior. If you go back to the original idea of Dill to put out our albums. I think 1991 was our first official release, but after that point, we branched out because we were touring and we would meet other bands on tour. The original idea was to put out our own music and it just fell into my hands and I felt like I had a talent to see what other people would like.

[The name] "Asian Man" was a Skankin' Pickle song. I wanted people to know that the company was run by an Asian American. If you look at punk rock as a whole, not many people of color at all. It was something important on a political stance to let people know that a minority was running this thing.

Park on being an "Asian-American Punk rocker" or "a punk rocker who happens to be Asian American."
I think a little bit of both. I think itâs very important to me, at least, to have that identity, to represent people of all colors, not just Asian Americans, but the Black or the Latino community. Any people that are trying to be involved in underground music.

Since AMR's founding, it has been run out of Park's mom's garage.
It's literally organized chaos. It's so much stuff in such a little space. It's a two car garage and it's completely taken over. Then down stairs, where my bed room used to be, it's completely taken over. I had to build a storage room in the backyard just to house the stock. There's a lot of dead stock. Dead stock-most record labels will destroy, but itâs hard for me to destroy. I have cds that I will never sell, but I still can't throw them away. I'll throw some freebies in mail-order, and maybe in another 20 or 30 years I'll get rid of everything.

When Park first started AMR, he didn't get full support from his parents.
When I first started Skankin' Pickle, it was more of a hobby. I was like, "Okay it's just a hobby." When I started touring in 1990, my parents started to get a little stressed out. They never accepted it until somehow, Korean media picked up on the music, around 1994, 1995, and I started getting a lot of magazines, [even] TV. I was covered in a lot of newspapers, magazines, and a couple TV shows that were broadcast on Korean media. Korean parents like to brag about their kids. So when the friends of my parents are reading about their kids or calling my parents about the press I was getting, my parents were like, "Wow, this is kind of cool." Then Asian Man started doing well. My dad was like, "Whoa, that's a lot of money coming in. Let's support him a little bit."

The first AMR was Less Than Jake's Pezcore which was previously released on Dill records near the end of the labels existence.
The first record was Less than Jake, that was catalogue number one. Skankin' Pickle met Less than Jake on tour in Gainesville. They gave meâ¦I think their roadie gave me their demo tape, and I started listening to it and I really liked it. That was the start. That was originally a Dill records release, and when I moved over to Asian Man, that was Asian Man number one.

On how Park decides whether to put out a record:
It's a lot different now. I've definitely put out records that I don't like, but I'll do it because I like the people. That model probably is not the smartest model, and I'm definitely trying to stop being a nice guy, and trying to put out records that I believe in. I think there's a couple ingredients: You have to like the music, You have to like the people, and you have to like what they stand for, just to make sure they're not meatheads. It's hard to put that into certain words. But when you hang out with people, it's like, "Oh they get it or they don't get it."

Although the term "Punk" has many connotations, Park specifically wanted AMR to be a punk label.
I think Asian Man is a punk label. I definitely consider us a punk label. You think of punk rock, that's a very vague term. In the punk scene there are so many different genres and so many people that I have nothing in common with. I have nothing in common with the violent side of punkâ¦ the smashed up anarchist mentality. I'm really just aboutâ¦ when I think about punk, I think about being smart and I think about being niceâ¦ a nice person. To me that's punk.

Check back soon for parts two and three!